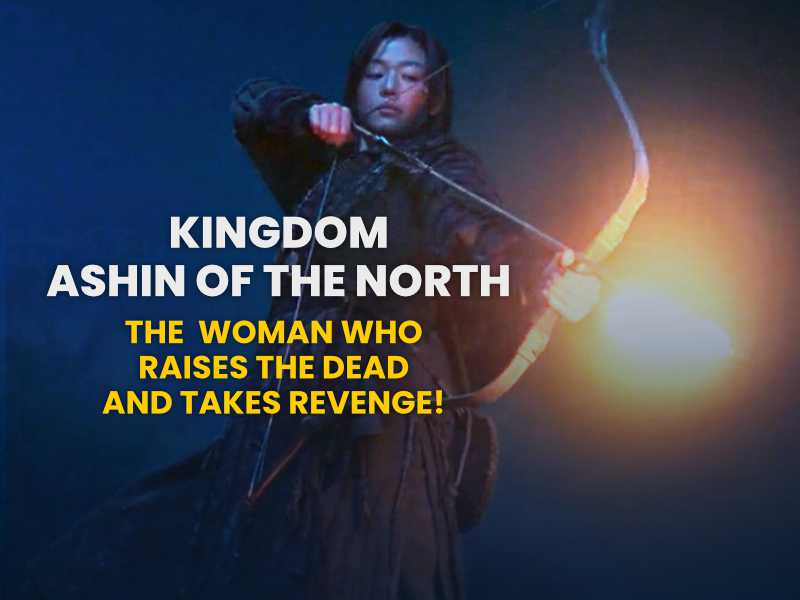 The following summary includes the list of the topics we will cover in our post related to “Ashin of the North.” The Kingdom saga adds a special character to its story.

Ashin of the North – Introduction

Ashin of the North is a 2021 South Korea production. It lasts for one hour and thirty-two minutes, and, let us say it, it’s a nice piece of cinematography.

At the end of Season 2 of the series “Kingdom“, the audience discovered a new and mysterious character: Ashin. And, as always happens with a season’s finale, further questions without an answer.

The movie is the perfect moment for Netflix and the production to reveal some secrets while creating new ones, of course. And, we think, also to catch a new audience for the upcoming Season 3. A card very well played, according to us, because the result is engaging and will bring more people in front of the screen for the new episodes.

Ashin of the North – The Story

The Joseon and the Pajeowi are living a moment of high tension. The southern part of Joseon recovers from a Japanese invasion, and the northern border of Joseon has become more vulnerable. When fifteen Pajeowi Jurchen men enter the forbidden area of Pyesa-gun, they find their death instead of the wild and miraculous ginseng they wanted to steal.

We will witness conspiring plans and secrets behind the people in charge of the investigation to find out who killed the Pajeowi. But blood calls to blood and the people of Seongjeoyain become the victims of the Pajeowi’s revenge. While the Pajeowi massacred her people, Ashin finds the resurrection plant necessary to heal her mother.

She read the ancient scripts in a cave and understood the properties and effects of this plant. It comes, in fact, with some side effects which will change the course of the events. After Ashin discovered that his mother and all other people of Seongjeoyain died, the desire for revenge becomes her priority.

But nothing is as it seems, and Ashin will discover a painful truth, which opens the way to new questions and acts of revenge.

Ashin of the North – Review, Analysis and Insights

Ashin of the North is not just a zombie movie. The South Korean production focused on the story and the characteristics of our characters. If Season 2 left unanswered questions, the Ashin spin-off clarifies some but brings new ones. And that’s what we need.

Ashin grew up in a border village between Joseon and the Jurchen people. Her family didn’t belong to the Joseon, neither to the Jurchen. However, they have settled in the Joseon’s territory and be loyal to their new people. Nevertheless, they were considered second-class citizens because of their racial roots.

Thus, her life always had a border, as well as her personality. She partially listens to her father, who asked her not to go into the forest to look for the magic plant. She moves between the desire to know more about the plant and the scary idea of the consequences she and her people could face.

The way she handled her revenge’s plan is borderline, according to us. However, the writers and the directors made a great movement, diving us into Ashin’s universe of emotions more than dialogues. So when she discovers the atrocity done by the Pajeowi to her people, let us cry together with her implacable pain.

We want Justice. We get revenge.

After the betrays and the lies she discovered, Ashin becomes cruel. And, we think, she passed the line of revenge, causing the nation more horrors, death and pain than necessary. A hero should protect and stand by Justice. But, we think Ashin, as previously passed the border to enter the Pyesa-gun area, moved forward any justifiable reason.

She used revenge to get Justice, but this is not what a standard hero does, unfortunately. And for this reason, Ashin doesn’t seem to be the nation’s hero, but more a villain, like Plague Doctor in Major Grom’s movie.

2. The plant’s side effects

Ashin finds a plant that can resurrect the dead, but at cost as some heavy consequences. So, although her father warned her never to enter the forbidden territory, she goes and gets it. The main reason is to heal her sick mother, but we know that there is more.

For instance, there is the desire to learn and explore, which moves any Ashin’s movement. She becomes the only one to read the instructions on using it, described in an old shrine.

Knowledge becomes her super-power, but there is more.

Other things Ashin taught us are constancy and dedication. She asked her local military to help her getting revenge. The soldiers allow her to stay in the base, and she becomes excellent in archery. Dedication made her the warrior we admired during the movie.

If this plant has the power to resurrect the dead, we know that it can turn them into Zombies, a new threat for the nation.

Ashin takes control of the Zombies

But Ashin learned how to bring the dead to life and how to handle Zombies. Her people, killed during the Pajeowi’s attack, are now Zombies chained at her command. She also brings them an alive soldier to let them enjoy a bit of “great cousin.” Well, also Zombie’s deserve a bit of good life, don’t you agree?

What will happen with the zombies and how Ashin will deal with them, it’s a core theme of the upcoming Season 3 of Kingdom. Questions bring new questions, and we think this is the purpose of this movie.

3. It’s much more than a Zombie’s movie

This film makes a huge difference compared to other Zombie movies because we have an engaging story. We have actions when Ashin implements her revenge’s plan. But also fantastic CGI, especially when everyone tries to hunt the tiger in the forest. Great drama is part of the story, with heartbreaking scenes.

For example, when Ashin discovered the death of her people, or when she finally found her father mutilated by the atrocity of the war. Ashin’s cry is touching; it’s something that describes much more than dialogues can explain. The Zombie’s attack in the base is excellent, directed with elegance among cruelty.

A particular chapter should be dedicated to the fantastic cinematography and acting in this film. But, first, let’s consider the beginning of the film, the camera’s description and movements, which bring us to the centre of the story. The music which accompanies the scene is engaging and keep you at the moment.

The film offers all the ingredients to make a story catching: betrayals, tragedies, injustices, mysterious discoveries, twist plot. And there is much more to discover.

The camera’s movement between the trees gives us the illusion to move inside the location, mainly when the tiger attacks the people who wanted to haunt it. The drums and the strings create an involving climax that delivers pace to the scene.

The costume and the details on the set are impressive in any detail. It’s simply very well directed; we can taste the fantastic cinema flavour.

We absolutely recommend it, and we hope that many other people will follow the upcoming Season 3 of Kingdom. If that’s the premise, we can’t miss it for any reason.

Where you can watch Ashin of the North