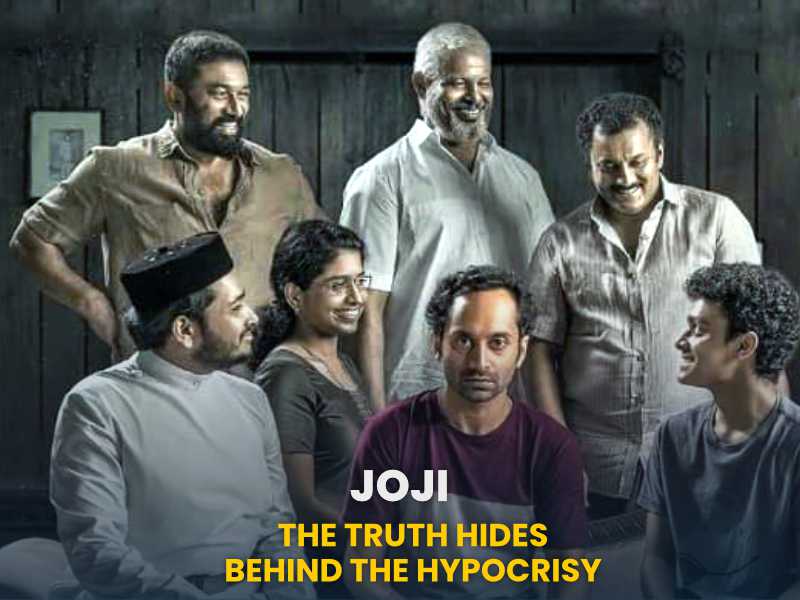 Joji is an Indian movie released in 2021. One hundred thirteen minutes of great cinematography, which shows us as a good film, can be done without a big budget, but mastering this art which is cinema.

Joji is an engaging story. An attempt to deliver a modern version of “Macbeth”. The movie hides many secrets behind this family, and you will need to find the truth through small details, which the movie gradually reveals.

The apparent slow pace of the film covers scary facts and horrific actions which are living inside of our characters.

It’s a dark story that reminds us how brutal we can be. And that horrible actions are, unfortunately, living inside each of us.

In a small Indian village, Joji is the youngest son of a rich family. He aspires to become soon wealthy, to show his community and family that he is not a failure. But all of his ideas can’t find any success, mainly because he wanted to invest in the tourism sector. But, as we know, the Covid pandemic badly hit this industry.

The relationship with his father is not good at all; because his dad is a man who built his fortune working hard day by day and can’t tolerate the attitude of his lazy son.

But this film is not only Joji’s drama. His brothers have their issues too. Each of them looking for easy money to improve their conditions. And, suddenly, the chance appears for anyone when something unexpected happened.

Something that will bring out all the terrible qualities the human species may have when its soul is greedy and craves effortless coins. In a lengthy exchange of silences, conspiracies and horrifying actions.

Joji tries to implement his plan, which doesn’t appear to be the only one on the table, because he is not the only one who wishes to get that dreamed money.

The movie almost succeeded in its intention to deliver a modern version of Macbeth.
The cinematography and the photography are really great, and the music as well.

1. The apparent not evolution of our characters

I would highlight that the development of our characters is not so deep; we don’t understand why they act in a certain way. What’s in their minds?

Perhaps this is done on purpose, as the movie hides many secrets behind this family and characters. And keep us engaged till the end to understand what is going to happen next.

All the characters on the scene have their evil intentions and plans. Although they act as models of morality, we will discover that they are not so different from Joji and, perhaps, from most of us.

Anyway, the movie deserves to be watched, perhaps also rewatched to catch more details. Like on some contraposition, when Joji wants the fresh fish from the pond, from the same place he is going to contaminate.

Joji lives between the desire for good things and the guiltiness of achieving them, not in a genuine way.

2. The metaphor of the mask

At a certain point, his sister in law Bincy asks him to wear a mask to attend a funeral. Apparently, because of the COVID rules, we all know now. But this movie hides messages from us, and it reveals those very smartly.

A mask in the show business can have several meanings because it changes the truth about who is behind that and creates a new character. But also to cover himself when your actions have not been exemplary, and being covered by a mask let you face shame in the deep of yourself.

From this particular time, everything changed around him, and Joji becomes a new character.
He will need to adapt and act accordingly to maintain his strategy alive.

3. It’s also the contrast between Joji’s laziness and his awakening desire to explore when the subject is a crime.

This movie opens many questions about the genuineness of humans, which is often very fragile.

A particular mention goes to Fahadh Faasil , who delivers an incredible performance interpreting Joji. Fahadh is an authentic star, and we suggest you to watch him in his best perfomance in Malik.

Where can you watch Joji

The movie is currently available on Amazon Prime Video, but check this link to see where you can steam the movie in your country. If you enjoy the review, we have a good news.

Welcome to my profile! :) I'm Giovanni, the founder at Spotamovie. If you love movies, you are in the right place. Let's enjoy together our community and new films!
0 0 votes
Rate the Movie
Subscribe
Login
Please login to comment
9 Comments
Oldest
Newest Most Voted
Inline Feedbacks
View all comments

[…] movies industry is delivering authentic masterpieces this year. A few weeks ago, we reviewed Joji, which was an original piece of extraordinary cinematography. Today we want to review Malik and, […]

[…] Indian movie’s industry is releasing excellent titles in 2021, such as Joji and Malik, to mention some. The quality delivered is incredible, and Pachchis is an interesting […]

[…] is the year of incredible Indian’s movies. Mandela, Malik, Pachchis, Joji, to mention some of them. Mimi is one of our favourites this year, and we will explain to you our […]

[…] story that makes the difference but how the whole cast delivers it to us. Like we already seen with Joji and Mimi, for example. That’s the art of cinema. So let us guide you through the […]

[…] movies in 2021 are absolutely engaging. We reviewed Malik, Mimi, Joji and Mandela to mention some. Dhamaka, released in November 2021, seems to have all the requirementss […]

[…] movies in 2021 are absolutely engaging. We reviewed Malik, Mimi, Joji and Mandela to mention some. Dhamaka, released in November 2021, seems to have all the requirementss […]

[…] and interesting stories. We would like to recommend you some other recent titles: Mimi, Joji, Malik and […]