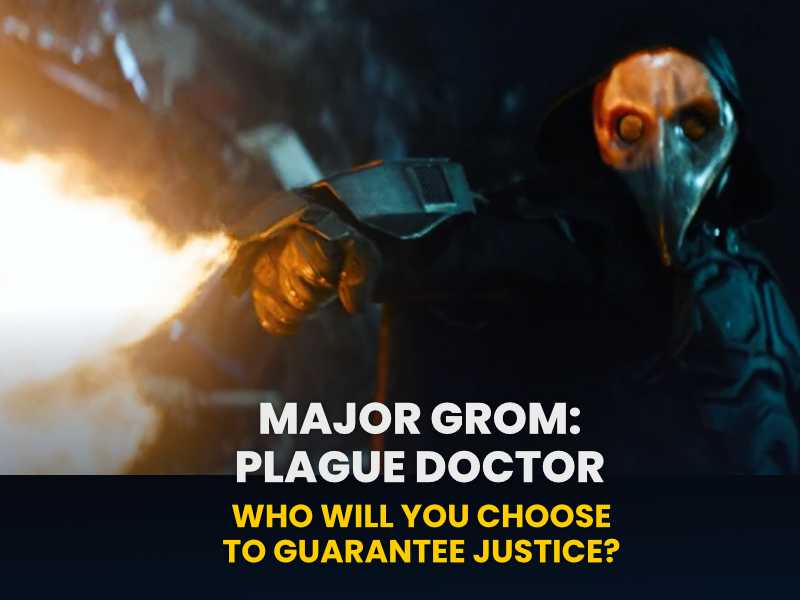 The film takes its inspiration from a Russian comic book “Major Grom” published by Bubble Comics. It’s your atypical superhero movie. Let us explain why, because there is a lot to say when a film seems to be the potential start of a kind of “Russian Marvel” saga.

Police Major Igor Grom is the best officer in St. Petersburg. He is well known, but not famous, for his desire for Justice which makes him face dangerous criminals. But, as often happens, good police officers are not protected by the law and institutions.

The reality where he lives is full of injustice, corrupted judges and authorities. Anyone who wants to guarantee Justice is not welcome in this surreal St Petersburg. Everything changes when a new character joins the scene, wearing the mask of the Plague Doctor.

The latest entry becomes the antihero, loved by the people. He wants to heal his city “sick with the plague of lawlessness,” and, to do so, he kills criminals who escaped their punishments with the help of money and corruption. Both heroes are playing for the same goals but with different methodologies.

Igor is working far away from media, while Doctor Plague streams his actions on the most popular social media. This last trick can awaken the society hungry for Justice, which will crush the powerless officers.

Even Igor faces the difficulties of this investigation for the first time, and the outcome can change the destiny of his city.

Starting from this section the post contains spoilers. Make sure you watched the movie first.

The director Oleg Trofim delivers a great production. He introduces a bit of innovation in the genre and guides his excellent cast offering a nice action movie.

Tikhon Zhiznevskiy (Igor Grom), Lyubov Aksyonova (Yulia Pchelkina) and Sergei Goroshko (Sergey Razumovskiy) are the main actors on the scene. And they are simply excellent in their performance.

1. The desire for Justice. But what is Justice

The St Petersburg of the film is a lawless city. The authorities, mostly corrupted, are not able to guarantee the rights of their citizens. The desire for Justice is strong among the people, but, unfortunately, it remains more a hope than a fact.

People want revenge, and they wish punishment for the lawbreaker. So when the Plague starts to execute unpunished criminals, the citizens support him.
The first reaction we experience in front of an unjustice is the wish of the same sufferance for the guilty ones. But this is not Justice; this is revenge.

Therefore, Justice should include punishment but also the possibility to redeem whoever did something against the law. Blood by blood is an old barbaric way to deal with this, and Justice must prevent it and guarantee the law.

It’s something that is supposed to make humans different from beasts because principles write the law. There is no reason to have governments without this structure, because we will be back to a primitive way to live our lives.

That’s why we should be the superhero who protect this vital part of our communities.

2. The two heroes. Pick your favourite

Following what we described above, the writers introduce us to two kinds of heroes: Igor and the Plague Doctor. They are working for the same goal but in a different way.

Igor is an atypical superhero if we compare him to Batman, for instance. He doesn’t have superpowers, doesn’t wear any mask or costume, lives literally in poverty, and no one appreciates his contribution on protecting the law and the people.

Igor puts the victims and the people before himself. He loves Justice and can’t stand it when the law does not punish the guilty ones, but he always tries not to kill anyone but, instead, just to bring those people in front of a court where the law can guarantee Justice.

By the way, the streets of this St Petersburg really remind of Gotham.

On the other hand, we have the Plague Doctor. He can’t stand either injustice, but he creates his law, where revenge and blood are the main principles.
He spectacularly kills the guilty ones and streams the events on the most popular social network so that everyone can see its actions and learn the consequences they will face breaking the law.

The Plague Doctor has superpowers; he is wealthy, everyone can appreciate his successes on social media and become famous and popular. And we know his background and history, while we don’t know much about Igor.

The film does a great job making us sympathise with the villain Plague Doctor. But, following what we described early, he satisfies the desire for revenge and blood, while Igor tries to guarantee Justice for everyone, even for the guilty ones.
We have two superheroes, different from each other, with the same goal.

Who is your favourite one? Just a suggestion, remember who the villain is, and it will let you choose the right option. Hopefully, also, in your life.

3. The role of social media

Sergei Razumovsky, the social network founder of Vmeste, creates something powerful than any other weapon: a social network. He does it with noble principles, willing to help people learning more and share their lives

But, Vmeste also becomes the tool where hate, violence, and the desire to eliminate the Russian oligarchs spread. In a genial way, the film shows us the pros and cons of social media.

The movie teaches an important lesson, the law must regulate the social network because they are an excellent weapon; but we need to know how to use those properly.

But we need several Igor to make sure that whoever needs to write the rules does it according to the principles of shared benefits, willing to protect the users, and guarantee the law and not the powerful men behind those.
It’s the most challenging part. So please, Igor, help us.

4. Is it Major Grom the beginning of a “Bubble” Saga?

Spot a Movie welcomes films from all over the world, and we are genuinely excited to think that finally, Russian and Americans can challenge themselves with great movies. That’s the “rivalry” we want to see because it will deliver excellent films that make a better society.

Bubble Studios produced an excellent film. The CGI is terrific; We have all the ingredients to deliver an engaging story: great shots, decent humour (yes, also Russian can laugh), appealing music, great actors, a hero, a villain for whom you will have sympathy, a plot twist, an impossible mission to be solved, a beautiful woman flirting with Igor, and a nice friendship as work in progress for the whole movie.

It’s probably the first superhero Russian movie and, if this is the premise, we can expect new productions coming from the Russ. Don’t forget to watch the scenes during the credits because the feeling is that Igor can have his sequel soon.

For this reason, we think that a Bubble Universe could soon invade our screens. And we can’t wait for it.

This year the Black Widow goes out with a new friend, Igor. So we can sleep relaxed; we have someone who can protect us.

Where you can watch Major Grom: Plague Doctor

The movie is currently available on Netflix. but check this link to see where you can watch it in your country.

Welcome to my profile! :) I'm Giovanni, the founder at Spotamovie. If you love movies, you are in the right place. Let's enjoy together our community and new films!
4 1 vote
Rate the Movie
Subscribe
Login
Please login to comment
0 Comments
Inline Feedbacks
View all comments