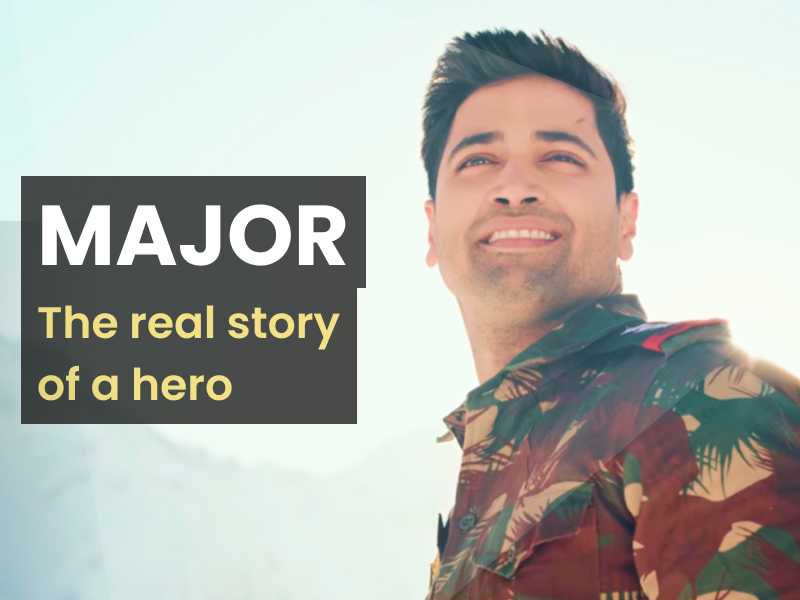 The following summary includes the list of the topics we will cover in our “Major” review.

Did you watch Major? – Spoiler Alert

Our world is unfortunately witnessing more than fifty wars right now. And mostly each of us is aware of terrorist attacks and organisations such as Al-Qaeda or ISIS. Behind those tragedies, there are always reasons, often unheard, and day-to-day heroes who keep us safe.

Today’s story is about one of them, and an inspiring figure within the Indian society: Major Sandeep Unnikrishnan. And we want to tell you why, in our opinion, he must be celebrated, because his life taught us something crucial, and we want to share it with you. So stay tuned and let’s start.

What did we learn after watching Major?

What does it mean being a soldier?

A difficult question that, unfortunately, too many people nowadays try to answer every day. It’s a real shame and failure of the whole humanity. But we learnt something powerful from Sandeep and, we hope, it may inspire us to solve all the wars around the world, because the solution is so easy that we often forget about it.

Yes, being a soldier means being part of a big family. But the genuine answer is too complex, and only soldiers may understand it. Soldiers are courageous because feeling fear is what makes you human, but overcoming the anxiety is what makes you a soldier. Being a soldier means sacrificing your life, because your country is what comes first, no matter what. A soldier is a son and husband of his country first; that’s why he always chose his job over his loved ones.

The drama behind the film.

If on one side Sandeep needs to renounce to his family and Isha, on the other one his parents and wife have to feel the same pain. But there is a significant difference between them: his parents always supported him, at the cost of painful tears. Isha, instead, wanted his signature for a divorce. Was Isha’s decision right? We can’t tell, because it’s a personal choice. But she knew who she married, and the scene at the movie’s beginning when Isha tells Sandeep that they can be only friends came to our mind. We can’t fully blame her. We would be hypocrites.

In the end, the presence of Sandeep near Isha progressively disappears during the movie, and Sandeep becomes exactly like her parents fading from her life day after day. And we should also underline that Sandeep’s memories, when he was dying, go to his mother and father. Isha wasn’t part of his last thoughts. It’s like the divorce papers killed the trust and love he had for Isha. It wasn’t an easy situation, and what we want to highlight is that thousands of people face this situation every day.

The solution, probably, is always in the middle

A compromise can save marriages, lives and end the wars. The characteristic we learned from observing Sandeep’s attitude is that he didn’t know when it was the moment to stop to preserve the love around him. For example, when he was a child he risked being attacked by a dog. Then, when dating Isha, precisely at the moment when she is confessing her love to him, he stopped her to go and saves his neighbour from the aggression of her husband.

And, tragically, it cost him his life. For example, when he killed the terrorist with the red shirt, probably it was the moment to move back and ask for help. Sandeep could save his life, but he didn’t want to risk any of his “brothers.” He always put other lives before himself. It’s a noble thing but, as we said, everything requires balance and compromise. We think that with the right dose of rationality, probably Sandeep could tell us this story by himself.

But Sandeep always crossed the line.

And it’s not just a way to say it. The most inspiring scene of the movie is when the two militaries are on the battlefield, and a stupid mistake could cost a war between India and Pakistan. Sandeep goes into the middle zone to play with the Pakistani children. It’s a powerful scene. The children, the new generations, instead, want to play and enjoy life. And Sandeep remained a child in his soul.

His character arch is particular.

It’s one that defends his original positions and approach to life. No matter what difficulty or obstacle or love life puts in front of him. Sandeep remained always the same child who dreamed to become a soldier, saving people and putting others before himself. He never cared about the risks, because his desire to explore and protect other people was higher than the risks. In the end, what Sandeep taught us is that there are no differences between people of different countries. And, most importantly, we should remain a child in our hearts.

How we can build a better world?

We should enjoy our passions and life, play together, work jointly to find a solution and keep everyone safe. Children could probably rule the world better than adults. What we see nowadays is that the older ones, instead of teaching the new generations, are killing them. The children tell Sandeep “bye brother.” While the children were playing, the old ones were pointing guns at each other. For this reason, we think that Sandeep showed us the way to build a better world. We must put aside our differences and become brothers. Are we ready to make it real?

Was Sandeep’s sacrifice worth it?

Again, we think that the answer is in the middle. We want to share with you a piece of a beautiful Italian song, which says:

“But she who loved him was waiting for the return of a living soldier. What she will do with a dead hero? If now beside her in her bed, it remains only the glory of a commemorative medal .”

Powerful words from one of the best poets ever. But when we look at the thousands of people attending Sandeep’s funeral; when his soldiers go on their knees to honour him in the same way Sandeep did while watching the news; when today we are talking about all the inspiring lessons we learned, we can only say that India must be proud of his soldier and we should feel honoured to witness this tragedy on the big screen.

There are many other things we would like to highlight, like the character evolution of Pramoda who in the beginning ignored Shirley, because she was too busy with her job. But then when the smell of death follows us, we realise what really matters in life. Therefore, she risks her life to save Shirley. It’s definitely an inspiring evolution. We can’t tell also how stupid it is to be mad at our loved ones; let’s think that Sandeep’s mother didn’t answer his last call because of the stupidity of pride.

And we would like to talk about the sad character of Isha. And about the role of media that, especially, nowadays with the ongoing conflicts, it’s making the worse of itself on both sides. But also journalists are a bit like soldiers. If we think they have their duties to inform us and make the show go on, even sacrificing ethics and honesty. But the time is ending and we need to move to our pros and cons.

It’s a masterpiece. Is it perfect? Almost. Photography and cinematography are top-notch. Any details are well curated but the director. The second part of the film, especially, it’s intense, spectacular, and full of meanings and actions. What makes the difference are the camera movements and the perfect music to enhance the pathos and pace. The camera moves and follows our protagonists in the scene.

We have the feeling to walk and run with them. Adivi Sesh, Sandeep’s actor, is also the writer of the film and what a fantastic job he did. It’s a huge production, where special effects are playing an important role. The fire, the explosions on the hotel roof, rebuild the stage; where all of this is the result of the incredible job of the whole team. Kudos to them, because with their job they taught us powerful lessons and inspired us.

It’s always the part we hate the most, especially, in front of such a masterpiece. But we didn’t like how the director told us the story between Sandeep and Isha. We couldn’t feel any emotions or connection between and with them. We didn’t fall in love with their story and it ruined a big part of the emotions. We felt more immersed in Sandeep’s relationship with his parents than with Isha. Was it the same for you? Let us know in the comment section.

Also, the first half of the movie doesn’t have the same intensity as the second one. It’s normal because the director was building the climax and evolution of the story. But, again, it was the part where the relationship with Isha should be developed much better. Anyway, we need to say that the film develops its story in each scene. Any moment is relevant for the development of the story, and it’s a clear sign that we are talking about a fantastic movie.

It’s time to reveal our final rating. If it was a story of superheroes, the film would be something already seen and not original. But, instead, this is a real story and it makes Sandeep much more than a superhero. He is in fact a hero, a real one. A man who inspired a generation and, we hope, the ones to come.

Our final rating for Major is:

Did you enjoy Major?

We hope you enjoyed Pawankhind. Let us know your opinion in the comment section. And let us suggest you a couple of great movies made in India: Mimi, Jai Bhim, Malik.