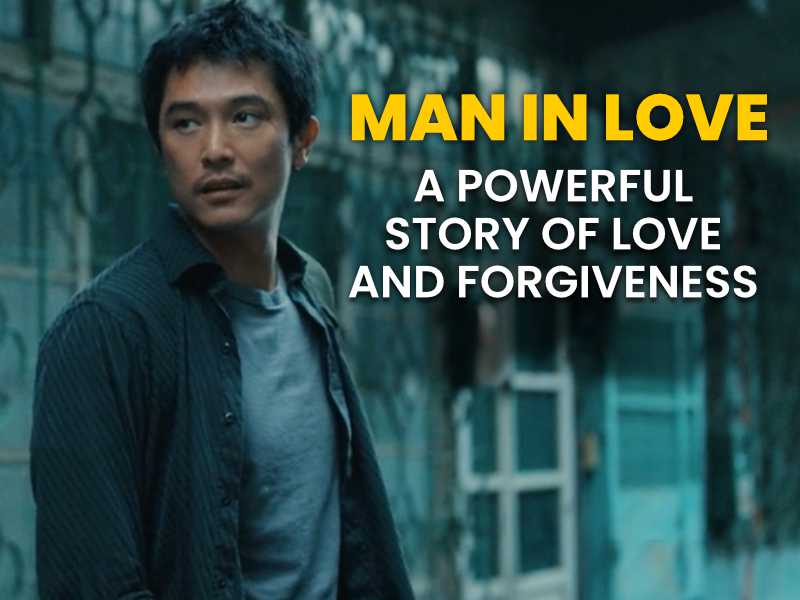 The following summary includes the list of the topics we will cover in our post related to “Man in Love.”

“Man in Love”, original title “Dang nan ren lian ai shi,” is the first movie from Taiwan that we reviewed at Spotamovie. Let us tell you that this is a very well-made film, where the art of cinematography makes the difference, transforming a “simple” story into an authentic hurricane of emotions.

“Man in Love” gets its inspiration from a movie produced in Korea in 2014. The characters have different behaviours, and the outcome is also, in this case, excellent.

It’s a movie about love in all of its incredible shapes and meanings. But also about forgiveness, family, difficulties and daily survivals. Perspective and misunderstandings are also two crucial topics that can change the way of any story. So let’s dive into this one.

Man in Love – The Story

A-Cheng, the protagonist, is working as a debt collector for a powerful lady. He and the other team members need to bring back the money she lent to the owner of different shops, plus interests. The real problem is that A-Cheng is a kind-hearted man who often finishes giving cash for free to those people instead of punishing them.

During one of those operations, he met Wu. She is a beautiful and educated girl, the daughter of one of the people who needs to repay him. A-Cheng falls in love, and he thinks of another solution to let her repay the debt her father left open.

Everything changes starting from this moment, and, together with our characters, we will live challenging situations, unforgettable moments and learn powerful lessons.

The movie received six nominations at the “Tapei Film Festival” in 2021. Best narrative, best director, best actress and best-supporting actress. We think that the film deserved at least three awards and not only nominations.

Especially for the director Chen-Hao Yin and the main actors Roy Chiu (A-Cheng) and Wei-Ning Hsu (Wu). They remind us that a film is a piece of art, and to deliver its purpose, it needs excellent artists like them.

1. A good man in an evil world

A-Cheng is the villain who becomes the hero. Instead of taking back the money from the debtors, he gives cash for free to them. He punishes himself for his role hitting his head and drinking gasoline, for instance. He must do this job because he also needs to repay his brother debt to Madam Tsai.

A-Cheng desires an everyday life, but he can’t fit anymore in the world. For example, when Wu wants to open her shop, he decides to support her, but A-Cheng discovers that life is too expensive for ordinary people. It’s too much for him and, after he quits his job, he asks Madam to take him back for another job. It’s the power of easy money, once you get used to it.

He is strong outside but fragile inside. He breaks and often loses control of his actions. For example, when he tells Wu that he likes her, but she rejects him. At this point, A-Cheng gets drunk and violent, visiting his mistress and then going back to the hospital to tell her that he didn’t mean it. Proud makes him fragile, mainly because he needs to keep his position of leader in the story.

Also, his family punishes him, particularly his ungrateful brother, but he is always there for them. Unfortunately his brother understood to late the truth about A-Cheng. He has been kind to Wu since the beginning of their story. He waits to win her trust and show us his good side several times.

A-Cheng needed just a better world because he is kindness at the service of evil people.

2. The power of love. Love is to give

At the end of the movie, we felt heartbroken. We discovered everything A-Cheng did for many people, although everyone judged him as the bad one in the family. He takes care of Wu’s father and then organising a dignified funeral for him.

A-Cheng brings supplements to his father and cares for him, even if he receives only insults. He guarantees with his job his brother activity, but his brother doesn’t want him around anyway. A-Cheng gives money to people, even when they try to hit him.

He risks his life going against Madam Tsai, but helping people is more critical because he shares the same past with them. A-Cheng waits to win Wu’s trust. He tries to be the best gentleman he can, even when she rejects him multiple times. When he loses all of Wu’s money, he thinks to be only a problem for her, that she deserves someone better.

Therefore he sacrifices himself by going to prison to let her free (this part reminded us of Cherry). Even in the end, he always looks for her to make sure she is happy without him. He brings her money back, but this is not what Wu wants.

Their love is strong, and we think of the song he dedicated to her at the bowling: “Love you always till the end.” Just a correct prophecy that he always kept alive.
Everyone changes their opinion about him after he dies. But, he never stopped loving anyone, even when people hated him.

For some weird reason, most of us appreciate people only when they are gone. A-Cheng taught us something powerful: love is always to give, without expecting anything back. Are you ready to try?

3. The misleading view of perspective

At the beginning of the movie, we didn’t have an excellent opinion about A-Cheng. We think we can all agree. The same happened to Wu. She didn’t like him because he was rude, a debt collector who hits the poor sellers in the shops.

Even when he starts to gain her trust, Wu assists just the final part of the episode when A-Cheng stops the other guys from destroying the shop of a poor man. Even the sentence she hears from a stranger, who said he always acts like this, becomes a dangerous misunderstanding for their story.

A-Cheng always protects the people, but she understood the opposite. The same happened to his brother or his father; they never understood the good heart of A-Cheng.

Perspective really changes the reality around us, often in the wrong way. “Dr Bird’s Advice for Sad Poets” is the perfect film to understand the tragic mistakes perspective can cause to us.

There is no doubt that A-Cheng is not an ordinary man. He always surprises us. He and Wu have different pasts and education. Their relationship seems quite challenging, especially in the beginning.

In the most romantic moment, A-Cheng surprised us by asking Wu to marry him so that her father could rest quietly, knowing that her daughter would never be alone. She finally tells him that she loves him, an incredible moment that, the not ordinary A-Cheng, decides to live in his way.

He farts not once, but twice leaving us surprised and smiling. A bit less than Wu, but it was definitely not planned. Instead of blowing a kiss, he blew something else. No one is perfect. But it was a way to create intimacy and joke with her because this is him.

A-Cheng is not the educated guy we expected to see near her, but he proved his point several times. Their connection was so strong that before dying, instead of telling her that he loves her, he farts again precisely at the moment when she was thinking of the first time she said “I love you” to him.

For this reason, even a fart is a bond of intimacy that connect the story of two people. In these terms, maybe you can try with your partner too. You always have a good explanation to provide now. Are you dare to try?

We talked about A-Cheng, but Wu is a powerful character in a tiny body. Well educated, with an honest job, she probably had other expectations for her life. She was disgusted by A-Cheng initially but always proud and ready to speak her voice in their relationship.

She challenged him several times. For example, when she humiliated him by pouring the juice in A-Cheng head. But also when she kissed him for the first time and leaving him in his underwear. However, she started to understand the noble heart inside A-Cheng. And she fought for him.

Or at the bowling when another woman complained about A-Cheng performance; or when she went out from the restaurant just to talk to him and then take care of him till the last moment of his life.

Both of them gifts us with a powerful story, and we need to put together the pieces of our broken hearts and start to love as they did: giving without any expectations.

The film is heartbreaking, poetic, silly and full of meanings. The cinematography makes the difference. It’s a simple story, but keep us engaged till the last frame. Yes, of course, the actors delivered an excellent performance.

But the merit is mainly of the director and the narrative he chose. The music makes a significant impact and absorbs us in the scene. The soundtracks are unique and touch our hearts. We left the movie full of humanity and love. What else do we need more?

We do not have doubts that the best scene is when A-Cheng proposes to her, she replies with “I love you”, and he reacts with a double fart. In few seconds, we have the screen of the story and our characters. Lovely.

We needed, perhaps, more pace. Some scenes seem too lengthy or not necessary. For example, the ones with Wen. Or at the beginning of the movie, when the director introduces to A-Cheng’s world. But, let’s be honest, the film is well-done, and the heartbreaking finale deserves just our claps.

Where you can watch Man in Love?

The movie is currently available on Netflix but check this link to see where you can watch it in your country.

Together Together (2021) – Movie Review and Analysis