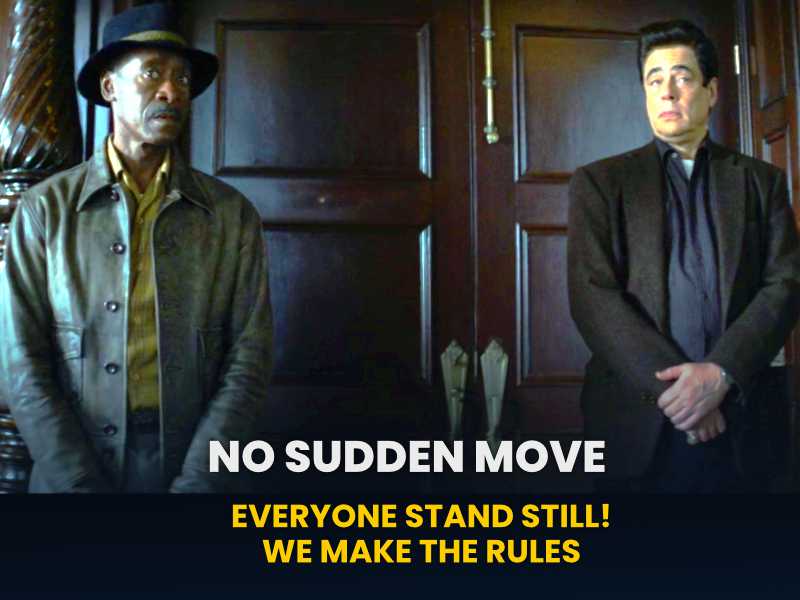 No Sudden Move is a 2021 American crime-thriller. One hour and fifthyfive minutes well structured and directed by Steven Soderbergh. And yes, this is another excellent film delivered with the support of Ed Solomon (writer) and Casey Silver (producer).

An exquisite production deserves an exceptional cast, and this is the case for No Sudden Move. As a result, we find on the scene actors like Don Cheadle, Benicio del Toro, David Harbour, Brendan Fraser to mention some.

Is it an easy movie? Like all the great pieces of art, I’m afraid no. Perhaps, it will be necessary to watch it several times to get all the curated details of this film. But let us guide you through this exciting thriller.

No Sudden Move – The Story

In 1950 in Detroit, Doug Jones recruits three gangsters for “babysitting” Matt’s family while Matt will steal an essential document from his boss office. Unfortunately, Matt can’t find the paper and, to protect his family, he tries to deliver a fake copy. Doug didn’t like this move and called his three men, Curt, Ronald and Charley, to change the plan. And everything changes on the scene, especially after the gangsters realised that the document at stake is a crucial one. And that they are victims of a setup organised by other criminals.

They start an escalation of events, betrayals and secret movements, which will change the story and the initial ideas we had about our characters. That is when we have to investigate and try to solve the complex puzzle, thinking a bit like a policeman and a bit like a criminal. In the end, this is what the movie forces us to do, to experience the difficulty of this “job” and how a sudden move can cost your life.

No Sudden Move – Analysis and Insights

Starting from this section the post contains spoilers. Make sure you watched the movie first.

Let’s be clear; this is not a movie where we should expect a happy ending, and you may not like where the story leaves you. Maybe you won’t appreciate the apparent confusion in the fragmentation of the events. But there are pure artistic points we want to highlight because the film deserves it.

1. Does a thriller needs just action?

When we started to watch the film and looking at the trailer, we expected pure actions. We have a bit of it, but there is something more. The movie delivers many tensions, suspense, and confusion, and we can feel the same uncertainty and troubles that our protagonists on the scene need to deal with.

We can’t easily understand the next step, the next decision, and what will come next. Who is behind the plot? And who is organising all of this?

We receive fragments of the story, discovering new characters who add something more to the action but never reveal the solution to the enigma. We believed that, in this case, Soderbergh changed the secret ingredient of the excellent thriller from action to uncertainty.

The result is pretty much good, enjoyable and keeps engaged till the end, and let me add, perhaps even after the end, trying to sort things out.

The precious document contains information about the design for a catalytic converter. It’s a device that reduces the emission of toxic pollutants from a car. The project will change forever the automotive industry, thanks to the safer approach to the environment. It became law in 1975, the year when any car manufacturer had to implement the catalytic converter

However, an antitrust case was made in 1969 against the major car producers by the Department of Justice. The giants of the automotive industry conspired together to hide the document for personal gain. This real sad story inspires No Sudden Move.

Very well-crafted cinematography enriches the film, providing the taste of an excellent noir.

The script is excellent, each details curated. So, let’s start from the beginning.

From where everything started?

Matt is the first one who understood the value of the document. Wertz first came across the catalytic converter design and hoped to sell the information to Hugh Naismith, a car company rep. So he and Paula, his lover, could run away happily together.

But Matt “chickened out”, and Forbert, Matt’s boss, sold the document to Mike Lowen instead. That’s why everything started and moved Naismith to seek help from Frank Capelli to hire Charles, Ronald and Curt.

The problem is that the document is now with our duo. Therefore Naismith and Lowen need to move their next steps.

Why did the two rivals Capelli and Watkins ally? And why Curt and Ronald?

They share the same goals to punish Curt and Ronald. Capelli wants to kill Ronald because he sleeps with his Vanessa. Watkins needs to recover his precious codebook from Curt. Through the help of Doug and Charley, they plan to close their revenge, but it will take much more than this.

Doug hires Curt, Ronald and Charley to steal the document from Matt’s boss office. After Doug receives a fake version, he reveals to Charley the plan to kill Matt, his family, Curt and Ronald.

The result is that Curt and Roland understand that they are victims of a setup. Therefore they kill Charley and instruct Matt about what to tell to detective Joe Finney.

But more importantly, they acknowledge that the document worths more than the initial $ 5,000 agreed.

At this point, Curt, Ronald and Matt drive to Matt’s boss to retrieve the original copy of the wanted document. And they succeed with their plan.

Now that they have the papers, they arrange a meeting with Frank Capelli, one of the boss organisers of the blackmail against Matt. Curt and Ronald want to assess the actual value of the documents to make their biggest crime which will change their lives.

Let’s make a deal with our enemies

But they both work secretly against each other. Curt makes arrangements also with Aldrick Watkins, another powerful boss. Ronald tries to convince Capelli to cut a deal together and that he is not the lover of his Veronica, pardon, Vanessa.

At the meeting with Capelli, Doug, called by Frank, shows up with the clear intention to kill Curt and Ronald. But Capelli’s plan fails, with Doug killed by our duo. Capelli tries to escape, but Curt and Ronald caught him. They get from Frank the name of his contact: Naismith. Curt contacts him and arrange to sell him the document for $125,000.

Let’s mention that the horrible day for Frank didn’t end up with the failed plan. Coming home, his battered girlfriend Vanessa kills him to complete her revenge.

But this is not the end; there is something more

Although they agreed with Naismith, Curt and Ronald revisit Matt’s boss. This time to get the name of the document’s owner, who is “Mr Big”, alias Mike Lowen, the arrogant automobile executive. He is willing to pay $375,000 for the paper, and our duo accepts the offer.

When everything seems done, the “fun” starts

After Mr Big leaves with the document, Curt and Ronald are splitting their money, but Watkins and his men get Curt and leave Ronald free with his money. What a generous act from Watkins to Ronald, but it’s just another setup. Watkins has also “recovered” the $125,000 from Naismith meantime.

When everything seems done for Watkins, detective Finney stops Watkins, but Aldrick bribes Finney with $50,000 of the Naismith money.

If the destiny of Curt is terrible, the one of the happy and temporary rich Ronald is even worse. While he is driving with Vanessa, yes, the ex Capelli’s girlfriend finds his death. She kills him and tries to escape with the $375,000. But another setup, Vanessa is stopped by a police officer who takes the money and allows her to leave.

So, where all the money are going?

Some powers go over the criminals that shoot with guns. They dress elegant, don’t make any noise, they make the rules, and everyone needs to adapt. It’s the power of money, as Mr Lowen explains to Curt and Ronald.

The $375,000 goes to “Mr Big” Lowen, but not only. He also gets the $31,000 added by Vanessa and the $50,000 from Watkins. Everything was collected and prepared by detective Finney. So once again, the real criminals have the blessing of the law. Sometimes for a bottle of good whiskey worth $88,00 and, perhaps, good protection.

How the government punished those companies?

If you are worried about Mr Lowen, let us reassure you. The government never fined those companies who wanted to hide the document. The manufacturers had only to implement the catalytic converter. Nothing else to pay to the government or people to be arrested.

So, the winner is Mr Big, maybe temporary looking at the antitrust act, but what about Curt?

Watkins set him free after he recovered his codebook and gave him the initial $5,000, revealing he dealt with Naismith. The extensive list of twists and chaos probably doesn’t have any final winners, if not injustice, but we are used to it in our day to day life.

4. The FishEye Lens and the Distorted Reality

A note goes to the choice of the lens to shot the movie. Soderbergh wants to recreate the Detroit of 1950 to provide a touch of authenticity to his film.

During the ’50, the noir movie usually uses a wide lens, so Soderbergh went with this lens. He wants to be authentic and reproduce for us the same atmosphere of that year. But we think that there could be another reason.

It provides us with a distorted vision of reality because, as we have seen, things are never clear for us. Distorted not only by the lens but also by the continual betrayals on the scene. So we think this was an excellent choice by our director.

5. No Sudden Move, Just stay at your place

With this sentence, we can summarise the film. Whenever someone tries to step over from his position to advance, other characters stop him. Everyone needs to stand still because their destiny is in other hands.

They are just some examples, but, for once, we lived the same emotions criminals live every day. And we also feel that losing taste at the end of the film, mainly because we cannot solve the case quickly.

The fact that the movie keeps us questioning what is happening and who is the mind behind everything makes this film a well-crafted masterpiece.

The feeling to be empty and with nothing solved at the end is also temporary, and it’s the result of good writing and directing. We hope that our analysis helped you solve the case and agree that:

Our final rating for No Sudden Move is

Where you can watch No Sudden Move