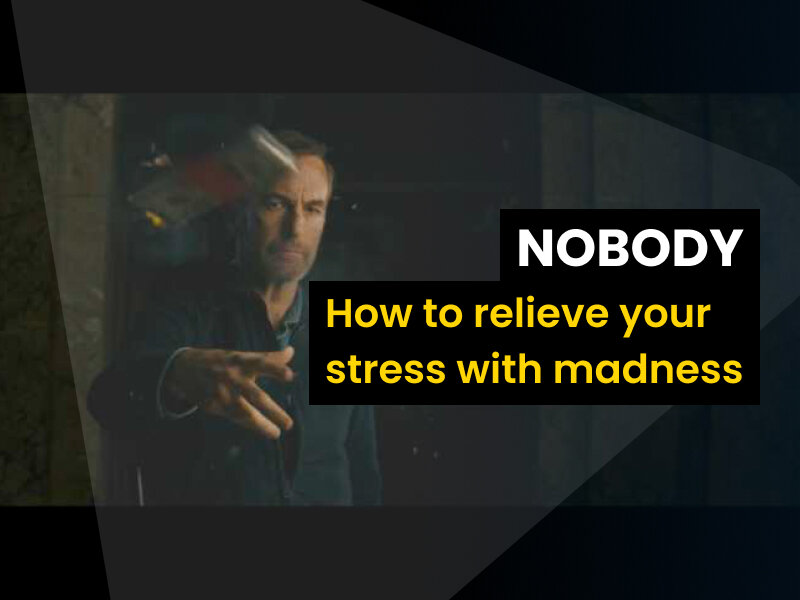 The following summary includes the list of the topics we will cover in our post related to “Nobody.”

When life becomes monotonous and exhausting, you need a bit of action. “Nobody” gives you one hour and 32 minutes, intense and full of frustrations, adrenaline, and pure madness. So, is there a better way to relieve your stress? Let’s find out.

“Nobody” is intense, well-directed, and it’s not a movie for everyone. You need to love actions, drama and bloodshed. However, the film has something powerful which can change moments of pure craziness into pieces of art. Cinematography and music are the keywords of this movie.

Is “Nobody” good for “Somebody?” Let’s first dive into the story.

Hutch Mansell is an ordinary man with a wife and kids. His life is not precisely exciting. His daily routine is exhausting in its boredom, and the people around him don’t let shine his best qualities. Then, one night, his life changes when two thieves break into his home in the middle of the night.

Inside Hutch’s mind, there is now frustration, and the criticisms of the people around him make him feel useless and underestimated. To find himself, he needs to look into his past, where his life was different. So the other side of Hutch resurrects and with it the “best part” of himself.

A night can change everything. It can bring fresh ideas, new perspectives or sometimes just troubles. And we are talking about big ones.

Nobody – Review, Analysis and Insights

Nobody won the “Theatrical Film Award” at the “BMI Film & TV Awards” in 2021. And it got a nominee for “Best Picture” and the “Best Actor” at the “Hollywood Critics Association.” It seems a simple story, but it touches on essential topics and highlights those for you.

1. The hidden monstrosity inside each of us

Nobody is someone with a dark past, shared with his father and brother. Hutch was working for the FBI and CIA with the only rule to kill the targets. He is someone trained to be intelligent and effective in eliminating the issue.

Therefore, Hutch spent his life working and living under pure adrenaline, in a parallel world where there is no space for mercy or a second chance. However, one day, he spares the life of one of his targets and decides to check on him after one year.

He found out that he needed a family. The monster inside himself wanted someone to love and to be loved. So, in the end, he is human, right?

Present, past and future

But if he was a “Nobody” in the old life because no one could know about him, in his new story, he is a “Nobody” because no one appreciates him. He is invisible and underestimated by everyone, maybe except to his little daughter.

The director Ilya Naishuller does an excellent job letting us experiencing his crazy routine and bringing ourselves to an exhausting point, together with Hutch, thanks to the superb editing on the scenes.
Apparently a useless life, unfortunately too similar to the one most of us needs to face day by day.

The climax before the burn out

The people around him don’t believe in him. His son calls his uncle to have a good story to tell and can’t forgive the hesitance of his father in killing the thieves. Likewise, his beautiful wife Rebecca (Connie Nielsen) doesn’t show interest in her husband mentally and physically. She just constantly reminds him that “he missed the garbage”. His brother in law is worried because Hutch is not able to protect his family. His neighbour wished that the thieves went to his house instead, to teach them a lesson, clearly indicating that Hutch’s reaction was not good. Hutch felt useless when he found out that he couldn’t even take care of the kitty bracelet of her daughter. Finally, the policeman tells him that he should have done something against the thieves.

Hutch is not someone terrible

All of this is because Hutch decided to be a good man. Someone who doesn’t want to kill who doesn’t have bullets in the gun and did something stupid. Hutch put his family before his passion. Therefore he continues a job he doesn’t enjoy doing. Hutch never reveals his real identity to his son to protect him and wants to appear as a model for his children. He doesn’t hurt Rebecca’s feelings even if she lost interest in him. He is always polite.

Nevertheless, no one appreciates him. Instead, the society around him pushed him back to his past, let him growing inside a terrible frustration and feeling of failure.

A man rejected by his wife, not considerate by his son and with the prospect of a life of delusions already reached his limits.

In this situation probably, each of us would react. The real question is how? If a new hobby and a new approach to life is your first answer, I’m afraid this is not the right one. For most of us, the response is violence.

On the contrary, what seems madness is the desire to receive love and feel essential for someone and or something. So we think the movies deliver a vital message because a monster lives inside each of us. Although perhaps it’s our animal instinct, the real art is to keep it under control. As we have seen in the movie, it’s enough that you lose a kitty bracelet to start something mad.

Well, at least to Hutch, yes. He started to cook lasagna to plan holidays with his family, and he recovered his relationship with his wife and family. Should you try it? Absolutely no, in the end, you aren’t a Nobody.

We mentioned above the exciting cinematography the movie delivers, but there is something more. The film provides some impressive scenes, and to do so, it makes a perfect combination of actions, violence and excellent music. For example:

When Hutch is walking, looking for information about the thieves, the camera does an excellent job on the notes of “Life is a bitch.” But also during the crazy moments of the bus scene. We feel how Hutch is waiting for the Russian to come aboard, and the music of “I gotta be me” perfectly follows Hutch’s desire to be again Nobody and feel alive again.

We can’t forget the poetic moment when he needs to get rid of his house and the Russian’s commando. First on the notes of “Straighten up and fly right,” when his “fellas” are dying in front of him. Then Hutch sets his house on fire, and the scene becomes poetic.

“What a wonderful world” in the background while flames and destructions bright the sky, and a new life is waiting for him, starting with stealing the cars of his arrogant neighbour. Meantime his dad plays the music of blood and dead with two Russian killers who chose the wrong victim.

A little note here. Have you noticed that Hutch tells his real story only to people who are close to death? But, of course, he doesn’t want to leave information about himself moving around, but we also think he really would like to share his story. Fortunately, the movie does it for him.

The poetry of madness

Another epic scene is when he kills Yulian’s guys and burns his fortune on the note of “The impossible dream.” Thus, the alternate moments of Yulian’s performance on the stage and Hutch destroying his life have a significant meaning: killing and violence can be art. And that’s the secret of this film. The film has the power to paint violence on our screen in an artistic way, sometimes almost poetic.

Let’ be honest, when “You never walk alone” starts playing is glorious, almost emotional. And those are just some examples, like at the end of the movie when “Let’s the good times roll and feel so good” celebrates the new feeling between Hutch and Rebecca, now entirely at his side.

Just one moment, the arsenal is driving with his brother and dad, and a new basement is ready for Hutch. Is this the beginning of a new chapter? To us, it looks like a sequel is more than possible. Someone will need to repay the Obshak in the end. Is this someone a nobody? We will see.

Nobody – Pros, Cons and Best Scene

It’s not the best movie of the year, but it is well-directed. All the actors are incredible. Madness becomes poetry thanks to the music, some slow motions and pure adrenaline. The pieces of music are perfect in each scene. The cars chase moments are epic.

It’s challenging to get bored because there is always a soundtrack to keep you up and running with our protagonists. Great direction indeed. Perhaps the movie is unrealistic, not credible, and just a waste of time for some people.

But let us remind you that it’s a movie, and it delivers its catharsis and liberation at the end, after so many moments of adrenaline. Isn’t this what art is about?

Difficult to pick one, the bus scene, Hutch looking for the thieves or when he is transforming the office into an arsenal. But the best one, according to us, is when Hutch kills the Russian guards and destroy Yulian’s fortune. It’s legendary, at the point that even Hutch tells it to a shocked Yulian.

It misses character analysis but not evolution. Our protagonists change during the film but, sometimes, we don’t understand why. We are missing the deep analysis and the history of our characters in more details. Who really are his father and brother? What they previously did in their lives? Why Rebecca loses interest in Hutch if he is doing what she wants?

There are a couple of questions that perhaps needed a bit more clarity and answers. But, on the other hand, it’s an action movie and to have all the pieces together will make not a great film but a masterpiece.

Where you can watch Nobody?

The movie is currently available for rent on several providers, like Apple TV and Amazon Prime Video. Check this link to see where you can watch it in your country.

Have you watched the movie? And do you agree with our analysis? Let us know your opinion, we are curious? 🙂

Why you should watch American Girl | Story and Trailer