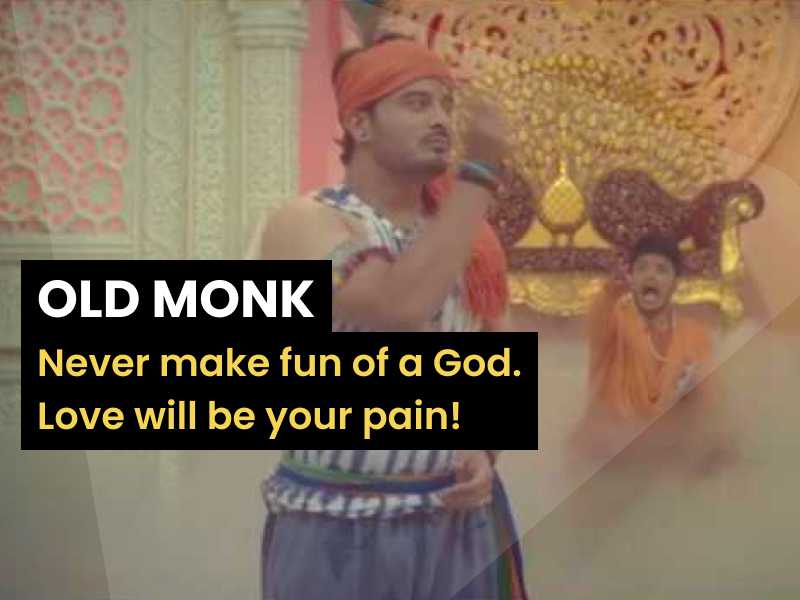 The following summary includes the list of the topics we will cover in our post related to “Old Monk.”

We have to recognise that Srinivas reached an excellent level of comedy with Old Monk. Then, of course, we may argue and discuss that the film is not perfect, but the movie’s idea is brilliant, and we loved it. India is still one of the best countries to deliver exciting films in 2022.

What did we learn from Old Monk?

Srinivas builds a crescendo of episodes that fit together during the movie’s development. Finally, he creates a climax where we know what will happen, but we can genuinely laugh and think about the messages delivered through this story.

Love doesn’t even spare the Gods.

According to Srinivas, the movie’s beginning is an original representation of heaven. Krishna, the supreme God, is busy watching sports on television. He forgets about his girlfriend’s birthday, and to ruin him and his happiness, Narada comes with his best qualities as a love breaker.

Betrayals, insecurities and jealousies are part not only of our lives but also of the divinities, As well as in ancient Greece, even today in modern India.

We discover from Narada how Krishna was flirting with other goddesses while he forgot about his Ruku, Bhabiji. Love is complex, mainly because it’s impossible to figure out the reasons behind a woman’s anger. In the end, our Gods are not so different from us humans. And love becomes inexplicable even for Krishna himself.

But love has many meanings in Old Monk.

If love is passion and a reason for suffering, on the other hand, it becomes the perfect instrument to unite a family built on arrangements.

If Krishna first and Appu later suffer for the same mistakes, we loved the dialogue between Appu and his mother. And the climax brings us to the scene at the restaurant when Appu’s parents discuss their relationship and share their agreement to interrupt the crazy tradition of marrying only for arrangement instead of love.

Love is a noble concept, so powerful that it goes behind God’s control. Yet, the mysterious gift keeps us alive, ready to risk everything.

Love is within our society.

But love also comes when Appu’s colleagues, tired of all of the abuses he committed preventing love and socialising in the office, listen to Ramu, the new grandpa, to appreciate all the good things Appu did for each of them during the years.

So, love becomes part of our lives under different episodes and circumstances. There is only one effort we need to make, be able to see it in all the beauties around us.

And love doesn’t know limitation; it doesn’t care if you are human or a God, and not even if you are young or old. “The Art of Love” is a real example to keep us dreaming of immortal love stories. What a lovely message Srinivas delivered to us.

Together we build the best version of ourselves.

Appu’s family has a tradition of weddings based on arrangement instead of love. Anyway, his parents taught us an incredible lesson. Even without a “formal love marriage,” they are always there for each other. Together they overcome their differences and help Appu find love and happiness. They are inspiring with their dialogues and characters’ evolution.

Even Appu’s father, the most distant from the idea of love, melts down when thinking about his true love Lalitha. But there isn’t jealousy in her wife, just the desire to let love triumph, at least for his son.

Love is not only passion because they show us that living together for all of those years, without anger, is the perfect expression of a relationship built upon respect, affection and love; yes, love in one of its manifestations.

And together, “The Free Demo Service” helps Appu win his election. Each of them does his part for the good of the community. Also, this one is love.

There is a strong parallelism between Indian and old Greek mythology. For example, Narada’s punishment looks very similar to the Prometheus one.

Prometheus is famous because he stole the fire from the Gods. So he basically donated life and civilisation to humans. And, even in this case, Zeus (Krishna of the old Greeks) didn’t like the “hubris” shown by Prometheus in challenging the Gods. Therefore his triumph lasted shortly.

The punishment of the Gods

Zeus punished Prometheus with eternal torment. He was bound to a rock while an eagle (A symbol of Zeus) was eating his liver (thought to be the seat of humans’ emotions). Every night, the liver regenerates so that the eagle can eat his liver every day for the rest of eternity. Not really kind from Zeus, but that’s the price to pay, thinking to be better than Gods.

After he destroys Krishna’s relationship, Narada becomes the victim of God’s revenge. If eating the liver of the starving Prometheus may seem like an atrocity, Krishna punishes Narada even worse in a certain way.

How Krishna complete his revenge?

To complete his revenge, Krishna decides that Appu must fall in love, convince her family that he is good for her and marry her. Not an easy task indeed, and Appu will have to strive for eternity, as for Prometheus. But love is something that even Krishna can’t control, so more than once, God becomes scared that the love between Appu and Abhi can succeed.

Therefore, Krishna must intervene to serve his revenge, genially rebuilding the same scene at the movie’s beginning. It’s Abhi’s birthday, and Appu forgot to wish her the best on her special day. To bring the cake this time is Krishna, again with extra cheese. But to ruin Appu’s happiness, his family play a strategic role. Each of them says something to worsen the situation.

Appu was calling another girl the night before and Krishna at the beginning. The climax reaches its peak when Abhi listen to his weak excuses of Appu. Abhi’s birthday was a silly thing, and at that moment, her face beautifully shows the end of their story. The revenge is now completed.

And this leads us to an artistic point.

The joints in the story’s structure amplify the comedy.

The movie may not cause you severe belly laughs, but it’s undoubtedly intelligent and well-structured. In the film’s first half, Srinivas prepares all the sequences and events that will be completed in the second half.

The Story is circular.

We already told you about the most evident example. The story is circular because it starts and ends with the same event but on different sides. If Krishna is the victim of Narada and love, the revenge takes place in the end. Therefore, Narada suffers all the pains, maybe more when Abhi leaves him, fulfilling Krishna’s revenge. And after the story of Prometheus and Narada, we learned that we never should challenge the Gods.

But this is just one example. There is more, for instance, the secret follower on Twitter, who will help free our teams from jail. Or the new investors who bought Appu’s company threatened to fire him and use the money to support Sashank’s election.

And we can’t end our lessons learned without mentioning probably the most comic episode. Karma seems to be the key in Old Monk. Appu’s strategy of breaking love stories is epic. Finally, the company’s new director must shave his moustache after experiencing his defeat. But actions have consequences; therefore, when Appu is waiting for Abhi and her father to officialise their wedding, we finally discover that Abhi’s father is his mustacheless colleague.

The secret for writing a good story

Every sequence seems to fit the next ones in the story. It’s the secret to writing a well-structured script.

And we can’t ignore the political battle between Appu and Shashank. But also how Appu helps his villain restore a love story previously broken by Appanna. In the rivalry, there is humanity, character evolution and love. We can’t ask for more.

Like in a perfect Latin comedy, Srinivas finds the best way to solve a pre-election chaotic situation. Directly from “The Art of Love”, Shashank’s grandpa comes to solve the puzzle. He gave the idea to let Shashank signs a contract where he moves corrupted money into the IT company used to blackmail Appu. Another genial idea.

We loved the idea behind the script. It’s genial. The different character’s evolutions within the story are heartwarming. The pieces of music add pace to the scenes, where the performance delivered by the whole cast is simply perfect.

And what about Narada’s character?

We want to tell you also another detail: Narada’s character.
Narada is a god-sage, famous for travelling as a musician and storyteller. He is one of the mind created children of Brahma, the creator. And Narada really went to earth to spread wisdom and set matters right. At least according to the Hindu traditions.

So Narada’s entrance chanting “Narayana, Narayana” is not only a movie scene. It’s the usual way Narada uses to make his entrance. We see Narada always with a musical instrument in his hand because he is one of the greatest masters of music. The instrument’s name is “Marathi”. We wanted to highlight to you the attention Srinivas put into building the details of this movie.

But, is everything so perfect?

If the script’s idea and structure are genial, we don’t think the final result is perfect. Hence, the only “complains” we have are about pace and dialogues. We felt there was more potential for belly laughs, for more powerful jokes and surprises.

Unfortunately, the feeling is that Old Monk loses its pace in the second half of the political saga. It’s a great idea, don’t get us wrong. We valued how Srinivas wants to inspire us to build a perfect society where we work together for the good of the community. But it seems too much and a bit overwhelming.

And the last note is about cinematography and photography. We loved the script’s structure and how all the sequences come together, but the photography is a bit poor. Of course, it’s a comedy more than a drama, but lovely shoots are part of the best cinema.

Nevertheless, we loved Old Monk, and it’s an absolute must-watch for 2022. Another good reason to watch it is the beauty of Aditi Prabhudeva (Abhi). She is sensational, and her presence steals our attention and heart.

Our final rating for Old Monk is:

Did you enjoy Old Monk?

We hope you enjoyed Old Monk review and explanation. Let us know your opinion in the comment section. And let us suggest you other Indian movies we loved: Mimi, Jai Bhim and Malik.