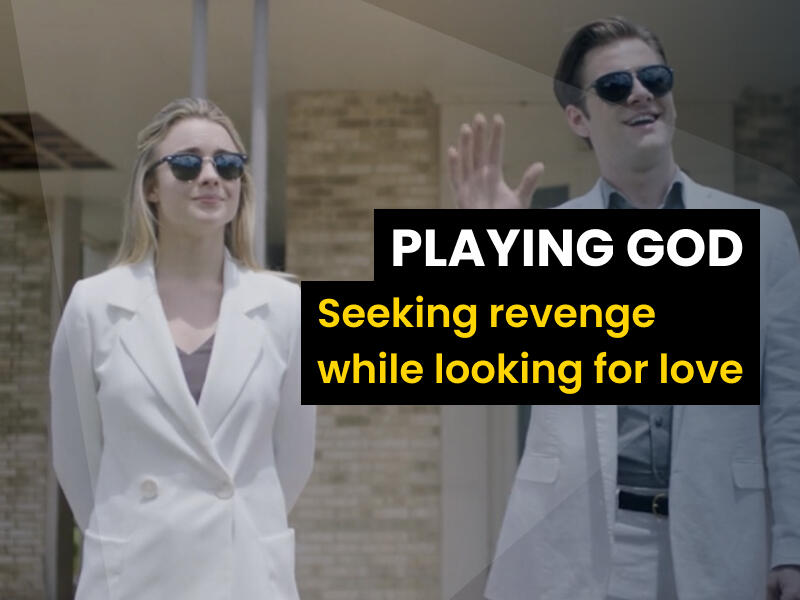 We have anticipated “Playing God” in one episode of “The Movies of the Week“, and we were right. It’s an exciting comedy and a drama with something powerful to offer.

Playing God is an American production that lasts for one hour and thirty-five minutes. It touches delicate topics such as God, family, forgiveness, revenge and that desire for love that keep us alive.

Scott Brignac, the director and writer, did an interesting job, but not perfect. Anyway, it’s a movie we suggest you watch because the story engages in all of the challenges around it.

Micah (Luke Benward) and Rachel (Hannah Kasulka) are decent thieves, but their lives changed forever when they picked the wrong target one day. They will have to deal with bad people to solve their issues. They need money and quickly. Micah comes with a “divine” plan when any hopes seem lost. They need to find God to discover their path to true salvation.

A section of the Bible inspired the movie. Precisely, Genesis 37:2-50:26, with Joseph’s story. But there is much more, and we want to share with you our analysis because the border between revenge and forgiveness is very thin, and you can make the difference. Let us explain it.

Micah and Rachel grew up alone, without parents. They learned how to survive, scamming people, even those they loved. For example, think of how Rachel stole money from June and Owen. Money are essentials for them but, even if they are twins, our protagonists have a different approach to life.

Micah is delusional. He doesn’t believe in relationships because everything sucks in life, except money. He is very practical but not happy, as we can see during the dialogue with Rachel on the bus.
Rachel is different. She doesn’t care about money. Rachel wants to live and build relationships. She needs June in her life. June is an inspiration for her, almost the mum she never had.

Rachel doesn’t want the dirty money Micah stole from his father. She prefers to work as a waitress and be honest. As a result, Rachel suffers and can’t find peace with herself, scamming even the person who loves her.

Their different approach to life is transparent. Micah craves for his revenge against his father. He tries to persuade Rachel that this is the right way to punish Ben and, therefore, redeem their lives by punishing him. Revenge and violence are the most spontaneous reactions most people have before delusion or injustice. Micah wanted to steal also the picture on the wall, not for money anymore but for revenge. We can notice that there is something worth more than money for Micah.

Rachel, instead, lives a personal journey to try to go over her thief life and start something meaningful. She wants that love she couldn’t have as a baby. Rachel is sorry for Ben multiple times during the movie. She has the opportunity to talk to her father, apologise to June, and be honest and the best version of herself.

To reach her goal, Rachel learned sufferance: feeling sorry and horrible and seeking forgiveness. She wants forgiveness from June. Rachel is sorry for what she did to her father. Rachel represents forgiveness and the research for the meaningful side of life. Maybe this is the reason why we loved her more than Micah, and you should think about that.

But what makes you feel alive?

Money can’t buy happiness. They can help us live a better life, but not our best life. Don’t you agree? Let’s look at Ben. He is a millionaire; he had a beautiful family and a daughter who were his world. When he lost them, he lost himself. No money can’t buy his peace and happiness. Memories and relationships are the best assets in our life, although we often forget them.

During his personal journey, Ben learnt forgiveness. Ben is sorry for what he did to his children when he finds out about the scam, not for what he lost. And when he goes to find Rachel, he is not angry; instead, Ben is seeking forgiveness and a new chance.

When Rachel says she is sorry, and Ben replies, “so, am I,” we think it’s the most beautiful part of the movie. It’s the power to admit that we are humans, that we can make mistakes, but also that we can start again. And then live those priceless memories they couldn’t enjoy till now.

On the other side, Micah gets the money, a beautiful girlfriend who he couldn’t afford before (yes, we think it’s the right word), and Micah is ready to spend his money. Still, he cannot provide peace to the delusional status we mentioned above.

So, what makes happiness for you? Money or healthy relationships? Team Micah or team Rachel? Let us know in the comment section below. We think that without Rachel, it would be a cold movie with a flat and sad story to tell. But, who wants that in its life, right?

2. Joseph and the Bible’s story

At the movie’s end, the director shows us a verse from the Bible. Again, we found a strong connection with the film’s story. Joseph is the favourite son of Jacob. His brothers hated Joseph because their father so loved him. (Doesn’t remind you of Ben loving Katie more than Micah and Rachel?) Joseph also told them that he had a vision where Joseph would lead the family. The hate increased, and they decided to kidnap him and sell Joseph to the Egyptians.

They stained his clothes with goat’s blood and sent it to their father, just to let him suffer because of the fake Joseph death. (Isn’t this Micah’s plan to steal all of his father fortune to punish Ben?) But what seemed something terrible became something powerful for Joseph. Joseph was sold to Potiphar, the captain of Pharaoh’s guard in Egypt. Joseph became Potiphar’s personal servant and subsequently his household’s superintendent.

Joseph honesty and integrity were the keys to his success. But after several vicissitudes and sufferance, Joseph can fulfil the prophecy and provide for his family and the brother who sold him. Joseph forgives his brothers and gains his position in life through a tiring job and integrity. (And we have the happy ending between Rachel and Ben)

Why this story? Let us explain it.

There is much to learn from Joseph’s story. As parents, we warn Jacob’s favouritism and its consequences on other children. Thus, for example, Joseph’s youthful pride and the envy and hate of his brothers. And we have a clear understanding of God’s faithfulness. He does not abandon His children, even in the middle of suffering. : “the Lord was with him” (Genesis 39: 3, 5, 21, 23).

Who could blame Joseph if he had decided to reject his brothers in time of need? Yet, Joseph showed them mercy, and God desires us to exercise compassion above all other sacrifices (Hosea 6: 6; Matthew 9:13). But it’s also about how God sovereignly works to defeat evil and carry out his plan. After all of his suffering, Joseph was able to see God’s hand at his work.

When he revealed his identity to his brothers, Joseph spoke of their sin in this way: “But now do not be sad and do not regret having sold me on being brought down here, for God has sent me before you to keep your life. [ …] So, it is not you who sent me here, but it is God “(Genesis 45: 5, 8).

Later, Joseph reassured his brothers again, offering them forgiveness and saying: “You have plotted evil against me, but God willed him to serve good” (Genesis 50:20). The worst of human intentions can never destroy God’s perfect plan.

Rachel forgives her father’s sins. She decides to earn her money honestly. Rachel accepts her sufferance and tries to become a better person. And she does, confessing her betrays to June and forgiving her father because she could see his regrets and willingness to live her.

Evil becomes good, it depends on God maybe, but mostly on our ability to love and forgive, because everyone can make mistakes, but only the good one know how to forgive. Thus, the movie becomes inspiring and redeems its script’s sins.

We feel an obligation to praise the interpretation offered by Hannah Kasulka and Alan Tudyk. We just mention them, but the whole cast delivered an excellent performance. The movie is something different from what the trailer sold us and, even if we laugh less than expected, we learn something powerful for our lives.

It’s the real wealth of life, as we mentioned above. We noticed the importance of God, maybe mostly the real one, but the desire for spirituality is something substantial that our consumeristic society knows how to hide from us. According to us, the story is powerful but delivered not in the best way.

As we previously mentioned, it’s a decisive moment when Rachel and Ben forgive each other. However, it’s not something instantaneous. The director let Ben wait for hours outside the restaurant. It’s like we need the time to forgive. To be alone and think and ask for forgiveness. We probably underestimated this act’s power, but forgiving someone and being forgiven is the best emotion that our soul or we can experience.

The idea of the movie is genial. The trailer lets us think about many funny situations that we didn’t have. But, let’s be honest, “Playing God” doesn’t look like a comedy, but more like a drama. We don’t have the pace or great cinematography. As a result, we missed more profound religious dialogues, not only the funny ones.

Our feeling is that Playing God had a much more significant potential than the final product delivered. The film should better release everything we tried to explain above on the screen. It’s a pity because we loved the idea, but the Frank-God should be something more inspiring and not so weak. It’s difficult to buy and believe his dialogue.

Where can you watch Playing God ?

You can currently watch Playing God on Hulu. But check this link to see where you can watch it in your country.