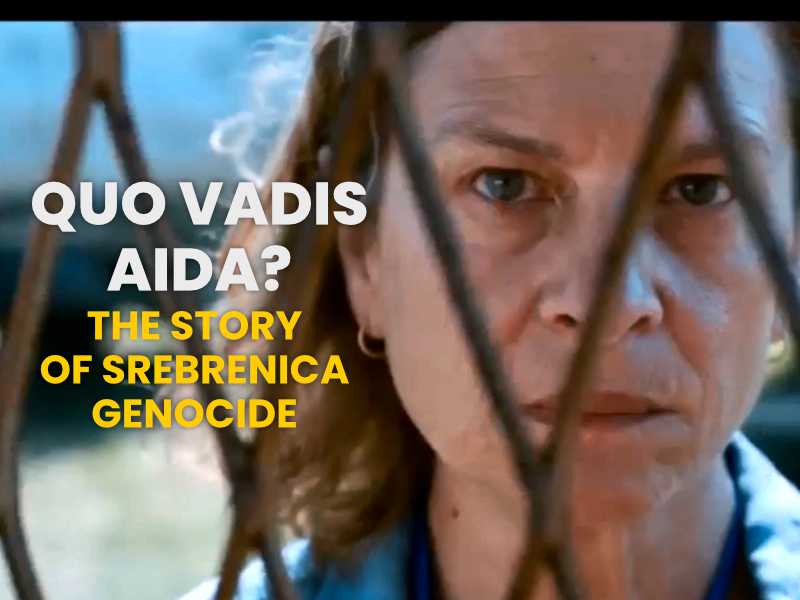 The following summary includes the list of the topics we will cover in our post related to “Quo Vadis Aida.”

Quo Vadis Aida is more than a film. It tells us a story, but it reminds us of our political organisation’s failures and invites us to wake up, so that those tragic events will never happen again.

The Srebrenica genocide happened in 1995 and, although it’s very recent, too many people ignore this tragedy.

Real events inspired the movie, although some characters are fictional. Nevertheless, the whole cast delivered a good product which got an Oscar nominee as “Best International Feature Film” and many others awards.

In July 1995, the Serbian’s soldiers were ready to invade Bosnia and the city of Srebrenica. U.N. officers and the military had the duty to protect the population and prevent invasion. Aida is an interpreter working for the U.N., helping during the negotiation between the Bosnians and the blue helmets.

While the time quickly passes, the commander Karremans doesn’t receive any updates or support from the U.N., NATO, or the Dutch government. The situation is dangerous. Thousands of people gathered near the U.N. compound seeking help. But they are too many, the blue helmets struggle to keep control, and general Mladic is ready to enter the city.

When the U.N. declares a city a “safe zone”, we expect protection. Justify the death of more than 8,000 people becomes impossible in this situation. What happened in Srebrenica is a tragedy that we never should forget. It will be the second crime in this sad story.

1. The use of media to write history

Both the U.N. and General Mladic use the media to write their version of the story. The U.N. was officially on a mission to protect the civilians and prevent the invasion of Bosnia. However, Mladic gave interviews to reinsure Bosnians and the entire world that he didn’t have bad intentions but wanted to build a new country for everyone.

Both of them wanted to appear as the good ones in this story. However, it becomes impossible to justify the death of 8,000 people when everyone had great intentions, at least according to their words.

History is always the version of one side of the story, the one who won the conflict.

In 2017, the International Criminal Tribunal for the former Yugoslavia (ICTY) convicted Mladić on ten charges: one of genocide, five of crimes against humanity and four of violations of the laws or customs of war. However, as we mentioned earlier, history is the one of who won the conflict.

Therefore, no one responsible at the U.N. or NATO ended in prison because they failed to protect Bosnia and allow Mladic to execute his genocide. And this part remains disturbing, especially after we watched the movie.

2. The death of people, memories and humanity

One of the recurring elements in the movie are memories. At a certain point, Anita loses herself, remembering the hairstyle contest and the happiness of the past. Yet, the same people, closed to their death, were together protagonists of a happy past now almost gone forever.

Anita needs to destroy all of her memories and photos to prevent Mlaidc from discovering her connections and life and saving some lives. She had to destroy her past to try to reach her future. When there is no past, there is no future for the next generations.

The movie has a vital role in reminding the next generations of the happiness and mistakes of the past. It’s the only way to let humanity survive.

3. The law can’t change—the desperation of a mother

Anita starts her mission to help on protecting the whole population. But, as things get worse, the need to survive and her instinct focus on trying any possible solution to save her family. But, unfortunately, any desperate attempt, anyway, doesn’t find the support of the U.N.

The law doesn’t allow exceptions for anyone, and the blue helmets failed again in their mission to protect at least a few people. So, Anita became “selfish” because of the desperation of the moment. That’s the proof that war makes us worst people, with no space for humanity.

Jasna Djuric delivers a superb interpretation in the role of Anita. Her face and expressions seem to say more than thousands of words. She is the picture of desperation.

4. The future generations are the new hope

The end of the movie is the necessary good message to deliver. The new generation is on the stage now. They need to act and unite people like during their theatre representation.

They open and close their eyes with their hands. Because we need to find a way to still keep our eyes open, even in front of the brutality of the war, it’s the only way to guarantee our future.

And Anita takes the chance to restart her life with this precise intention: teach a lesson for the future to the new generations, us included.

After just a few years from this terrible massacre, nowadays, we are living the same drama in Afghanistan, previously also in Iraq and Syria. Again, U.N. and NATO are failing to protect people.

It doesn’t seem clear why, not even to the politicians, apparently. We genuinely hope that this movie can reach everyone and remind us that there are no winners or losers in those situations. We are all victims of ourselves and our silences.

Any movie that brings the truth and helps to denounce actual events is always welcome. We deserve to know the truth and the story of our past. The actors did a great job of delivering this movie. The hope in the new generations is a message that we fully want to share and celebrate.

It’s a tragedy, with a lot of potential themes to develop. Unfortunately, we are missing soundtracks to engage us more in any scene and in the story. The camera movements are basics, and the cinematography is not excellent. The film represents the tragic moment where, it seems, that there is no space to add more cinematic elements to the scene.

Even if this is a real story, we expected more quality in the narrative, dialogues, music, editing, and cinematography. The purpose of the film is noble; the delivery perhaps could be better.

Where you can watch Quo Vadis Aida?

The movie is currently available on Hulu but check this link to see where you can watch it in your country.

Why you should watch American Girl | Story and Trailer