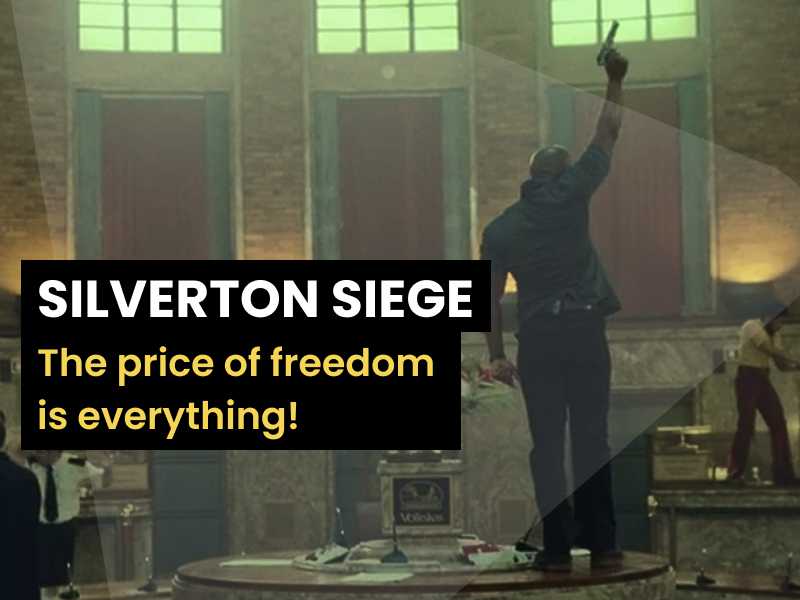 The following summary includes the list of the topics we will cover in our post related to “Silverton Siege.”

Silverton Siege is our first South African film, and what a movie delivered by director Mandla Dube. It’s intense, inspiring, and one of the best films recently reviewed in 2022. But is everything perfect? Let’s find out together.

What did we learn from Silverton Siege?

The first topic coming to our mind is “what is the price of freedom.” It’s everything.

We should never give our freedom for granted, especially looking at the recent events in Ukraine or Yemen. And we must know our history to understand how and why today we can enjoy our privilege.

But there is much more to say about Silverton Siege. Other vital topics are racism, corruption and betrayals; but, on the other hand, kindness, humanity, and the importance of dialogue and negotiation are the keys to be used instead of violence to solve any conflict.

And looking at today’s world, Silverton Siege is more actual than ever.

Desperation is what feeds terrorism.

The movie begins with Calvin explaining the horrendous abuses of the South African authorities against the black community and to his family in particular. He grew up in Mabopane, where he witnessed atrocities and the killing of their parents. Left alone, life could never be the same for Calvin, and the discrimination of the apartheid made his life more complicated than ever.

Therefore, Calvin decided to join the MK movement. He is without possibility, a future and left without the prospect of a decent life. His purpose for an honest existence gives room to the need for revenge and the desire to build a different society.

It’s precisely in this part that Silverton Siege strikes a winning point. It’s an attempt to wake up our minds, rethink our societies and realise the Ubuntu dream of sharing ourselves with others while caring for those around us.

Ubuntu will lead us to the oneness of humanity. A person is a person through other people. Thanks to what other persons teach us and share, we evolve and become who we are. It’s truly inspiring.

Christine is our Ubuntu’s example.

Christine reminded us of Thenmozhi in Mandela. They both share noble qualities such as generosity and kindness. Christine never leaves her duty to protect her customers; she talks to Calvin and understands his desperation.

Yet, in the most challenging moment, instead of caring for her life, she decides to speak to him and support Calvin and never give up the idea of changing our society for the better. She helps Terra healing her wounds; she comforts the other people; Christine gives her freedom and life to let Susan and the pregnant woman go out.

She is the perfect example of the new society Calvin and Mandela wanted to build. Christine is the face of the dreams of tomorrow.

She stands up and speaks about the noble values behind the siege. She explains their idea. And this time, it’s a white citizen, the minister’s daughter, not a “black criminal” like Calvin. Then Christine asks to free Nelson Mandela. A desperate attempt to change the world, to deliver justice for the unknown and unheard black people of South Africa.

A dream became a nightmare

But when her request becomes public, the government shots her down. And, unfortunately, literally. And to increase the drama, the absurdity of the situation, the police didn’t punish the soldier who killed her. So the authority can lie even if the victim is the minister’s daughter.

After her death, people wanted Mandela free. As a result, a new spirit within the society started. Rachel removed her wig and accepted herself. The authorities began to feel the pressure, and the negotiations weren’t any more an option.

Calvin and Langerman are similar in their diversity.

The director immediately tells us how Langerman and Calvin are similar in their way of thinking and managing complicated situations. For example, during the sabotage of the fuel tanks, they act and say the exact words. “Something is wrong.”

And they never escalated to violence during the bank siege. So if the “little crocodile” (homage to the ‘Big Crocodile” prime minister PW Botha) can’t wait to use force to break into the bank, Langerman instead understands that they are not criminals but people moved by something else.

He teaches the crucial role of negotiations and dialogues. And who knows how many wars we could prevent working on this logic.

Probably, without the “heroic” measure brought by the Brigadier, the film’s end may be different. That’s why we should never forget this vital lesson.

Langerman and Calvin experienced betrayals from their men.

If Aldo betrays his team because of the police’s blackmail, Langerman witnesses his colleagues making different decisions that changed the story’s end.

Christine’s killer remains free after he murders her. The helicopter’s pilot goes to kill Calvin, and we aren’t sure it was Langerman’s decision.

During challenging moments, we must be lucid to take the best decisions. Therefore, Terra kills Aldo without listening to his version of the story. As we can see, Silverton Siege is an excellent source of life lessons.

What’s the price of freedom? Everything. But what’s the cost of a revolution? Money. So, when Calvin starts to burn money, the tension with the police increases. We shouldn’t care about money for a better world because people are what matters. It’s an incredible metaphor that we wanted to highlight.

But, did we build a better world?

If we stop for one moment and think about our contemporary world, I’m sorry to write it, the progress achieved is abysmal. The #blackslivesmatter, Isis, Al Qaeda and many other organisations are signs of a society that didn’t learn from its past and, in particular, from the most inspiring characters such as Nelson Mandela.

It’s sad but true. And we think that films like Silverton Siege are necessary to wake up our spirit for justice.

We already mentioned how the movie is full of vital lessons. But we loved the pace, the tension and the cinematography in delivering any scene. The music perfectly serves the excellent job of our actors. It’s difficult getting bored while watching Silverton Siege.

Silverton Siege is a movie not a documentary.

Someone may say that the film doesn’t deliver the exact development of the facts, like what really happened. But there is a crucial element we must never forget: Silverton Siege is a movie, not a documentary. Fiction plays a key role, and we must clap for the excellent solutions brought by the director and his actors.

For instance, the finale is different. The real story says that the trio had three men, while we have Terra in the fiction. But the crucial difference is at the end of the operation. The reality is worse than the fiction. The police stormed the bank and killed the three “terrorists”. And also, two hostages lost their lives during the military operation.

Instead, we loved the heroic finale the director delivered. The African rhythm, the dance of Calvin and Terra, giving their souls literally to avenge their loved ones, is top-notch. The lights, colours, the intensity, the happiness to meet their death for their dreams, plus the choice of the fading noises of guns, are truly inspiring.

Among the film’s pros, we must mention the performance delivered by Thabo Rametsi (Calvin). He deserves an Oscar for how well he gave intensity and credibility to his character. He is a true talent, and we liked him.

We already clarified that Silverton Siege is fiction and not a documentary. But we think that the film is missing some of the character’s analyses. For instance, we don’t know much about Christine’s nanny.

We expected to explore more of Aldo’s drama and how he felt it. What was Lagerman’s reaction after the terrible end? It’s a quick and intense movie focused on pace and actions. We think that a bit more of the character’s arch and analysis would make Silverton Siege a masterpiece.

Nevertheless, it’s inspiring and to make a perfect movie is not easy, but “it’s always impossible until it’s done”.

Our final rating for Silverton Siege is:

Did you enjoy Silverton Siege?

We hope you enjoyed Silverton Siege review and explanation. Let us know your opinion in the comment section. And let us suggest you other inspiring movies we loved: Mimi, Jai Bhim and A Hero.

Welcome to my profile! :) I'm Giovanni, the founder at Spotamovie. If you love movies, you are in the right place. Let's enjoy together our community and new films!
4 1 vote
Rate the Movie
Subscribe
Login
Please login to comment
1 Comment
Oldest
Newest Most Voted
Inline Feedbacks
View all comments

Did you watch Silverton Siege? Do you agree with our analysis? Let us know your opinion. 🙂