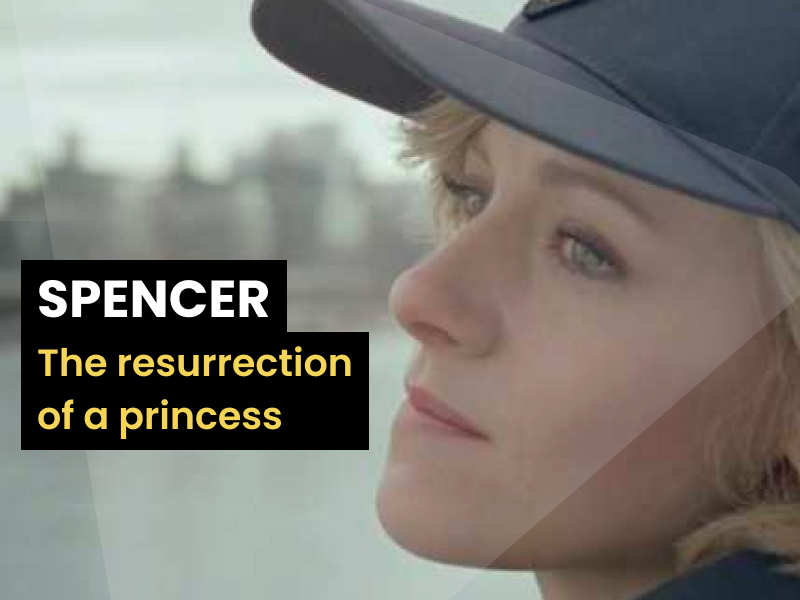 The following summary includes the list of the topics we will cover in our post related to “Spencer.”

Why you should watch Spencer

Released in 2021, Spencer tells the story of a specif moment in Lady Diana’s life, precisely when, after almost ten years of an unhappy marriage, she decided to change her life, shocking the whole world.

The film focuses on motherhood, on the contrast between her successes with the public and the media, and her failures to comply with the strict rules of the Royal Family.

Spencer is not a historical movie but, instead, is “a fable from a true story.” Pablo Larrain plays with her tale and makes a movie of dreams, hopes, ghosts, and frustrations.

Therefore, don’t expect a precise reproduction of the true events, but a visionary film that will lead Diana and us to emerge from the darkness of her madness and find a new version of herself, one which is not so different from her past.

It’s an artistic movie, where the whole cast tried to play their skills to make it fascinating and engaging. But did they succeed? The 2022 Academy Award nomination to Kristen Stewart in the role of Lady D., plus the thirty-three awards won worldwide, suggests yes, but is everything so perfect? Let’s explore it together.

It’s December 1991, and the location is the Sandringham Estate in Norfolk. The Royal family meets to celebrate the three days of Christmas, strictly according to tradition. However, the peace and perfection of the residence are in contrast with the tumultuous mind of Diana and the delusions of the family. Rumours about infidelity and divorce on her marriage increase, as well as her mental health troubles.

Spencer begins with a beautiful picture that reveals the whole story poetically. It’s an icy day, white and cold like the apparent mood of the Royal family. There is a tree branch in the spot, alone, standing a couple of high trees. According to us, the director is explaining the isolation of Diana, constantly under the radar of the Royal family for her behaviours not precisely compliance with the Royal standard.

We mentioned above that this is an artistic movie, and we brought you the first example. But there is more, and let us guide you through this particular movie.

It’s the contrast between the apparent calm and the approaching storm.

Since the movie starts, we notice how everything looks perfect, symmetric and ruled by a defined protocol. Every scene focused on the Royal family, the kitchen, and the staff working at Sandringham highlights a prescribed order.

All of this clashes with the scene when Diana is the protagonist. She brings colours with her clothes, unpredictability with her frustrations, beauty and the desire for a everyday life.

Diana has everything a woman can dream of: money, power, a family. And the last point seems the crucial issue. Charles is so focused on Camilla that he gives to both of them the same present for Christmas. So it’s not difficult to imagine Diana’s pain, mainly because the Royal family would like to have her happy like ten years ago when everything started. But, on the other hand, it’s not easy to imagine the real story behind the fiction. Still, it’s a pity to witness the failure of a marriage that, perhaps, it could be the best one in the history of the Royal, thanks to the personality of Lady D.

But what matters in our story is that the Royals couldn’t perfectly manage Diana, like all the rest of their protocols. So, perhaps, she needed watchers able to see her beauty and not her actions.

The three days before the resurrection.

Continuing to describe the poetry behind Spencer, it is worth mentioning how three days are necessary for Diana’s resurrection from her troubles. Her “sufferances” makes her kind of a figura Cristus. Diana needs to go through pains, delusions and almost death before seeing the light. The role of Anne Boleyn seems to suggest the spiritual presence of the Holy Ghost to save and guide her. It looks like there is a mystical dimension behind Diana in Larrain’s view.

The parallelism between Anne Boleyn and Diana reveals the story of two women betrayed by their husbands. But there is more; perhaps we are touching unreal theories. For example, after inventing stories about her infidelity, we know that Henry the VIII beheaded Anne Boleyn.

And in Spencer, there is a scene where Diana asks Darren, the cook, if he thinks they will kill her. Finally, in 2004 the English police investigated Diana’s death and the 175 conspiracy claims made by Fayed. There is an incredible detail that we must mention. In 2001 Paul Burrell published a note that he claimed belonged to Diana. She wrote that her former husband “was planning an incident” in Diana’s car, such as breaks failure and severe head injury, so that he could marry again, this time with his Camilla.

Prince Charles replied to the accusation, saying that he couldn’t understand why Diana had those feelings. Again a similarity with Anne Boleyn, a death involving heads. Fayed repeatedly claimed that his son and Diana were murdered. Is it true? We will never know the truth, but Anne Boleyn is also related to Spencer, making this similarity between the two princesses disturbing.

So, how was Diana resurrected?

When she arrived at the Royal estate, she was a free and lost spirit, without bodyguards and joy. She acted very childishly, being constantly late, refusing to follow the protocol, and constantly doing the opposite of what she was supposed to do. Her only reliefs are Maggie and her children. The desire for honest conversations, breaking the rules, and opening the Christmas presents like ordinary people make her mind suffer. However, the scene when Diana plays the soldiers with Harry and William is beautifully shot and warms our hearts in that cold environment. It’s easy to understand that love, feelings, and spontaneity are key.

And to find herself, she needs to run into her past, risking her life to access the home of her childhood. Diana needs to cry, feel lost, open the door of her past, and be ready to die, before Anne Boleyn can show her the way to happiness: break the pearls and run to her past, where life was warm, happy, silly and full of love.

If we look closer to the movie, we don’t listen to any words of the Royal family members. Instead, we see the world only through the eyes of Lady Diana in all of her complex evolutions. In the end, she becomes Spencer, perhaps, the true reason she was so loved by people, for her humans and joyful heart enriched by the beautiful colours of her clothes. Beauty is useless without a colourful personality, like in the episode with the pheasants and their feathers. And, most probably, Diana was the colour within the greyish sides of the Royal habits.

We must applaud Kristen Stewart. Her interpretation of Diana results from studies and observations on the princess. Kristen learned her accent and tried to play with the expression on her face. The cinematography is great but not excellent, and we will tell you why in the next section. The reproduction of Diana’s clothes is amazing, and we loved it. The photography is interesting, but definitely miles away from the superb quality delivered in “The Crown”. The pieces of music bring tension and dynamism to the story. The parallelism with Anne Boleyn is a good idea indeed. We liked the idea of creating a fable from Diana’s story, but was it good?

The evolution of Diana is made up, and it doesn’t feel natural. Diana is not polite with the staff member, while we know that kindness was her first virtue. Diana’s character leaves us far away from the beauty and empathy of the real Diana.

Even if the film focuses on those three critical days where her mental health was challenged, it’s hard to believe that this fable has all the elements for a good story. We also think that a good dialogue with the Queen would make a difference, revealing their differences and similarities, like the love for clothes and fashion and their need to adapt to fulfil their Royal duties. Finally, we feel that this experiment was a good idea but not adequately delivered.

Our final rating for Spencer is:

Where you can watch Spencer

The movie is currently available on Hulu, but check this link to see where you can watch it in your country.

Jai Bhim. Movie Review and Analysis of a Masterpiece. 2021 Movie