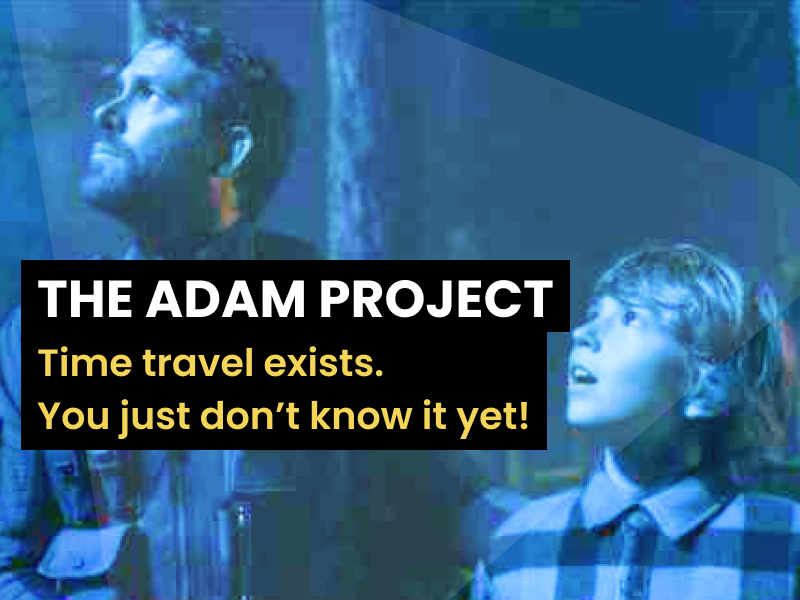 The following summary includes the list of the topics we will cover in our post related to “The Adam Project”. This post is about The Adam Project review and explanation.

Have you watched The Adam Project? – Spoiler Alert

The Adam Project Review and Explanation.

After the incredible success of “Free Guy,” the magical duo, Shawn Levy and Ryan Reynolds, is back with a challenging mission that brought us into an adventurous journey around parallel realities, travelling across time.

Like it happens in any journey, we come back with the baggage of our memory full of actions and with some meaningful message. We enjoyed The Adam Project, but is everything so perfect? So let’s start another trip, a retrospective to highlight the good and bad memories after watching the film.

The Adam Project moves around three times: 2018, 2022 and 2050. So it’s easy to get lost, and for this reason, we are in our fixed time to help you better understand The Adam Project. After so many destinations, a bit of jet lag can easily make our minds confused.

What did we learn after watching The Adam Project?

Imagine being able to meet your younger version of yourself or, perhaps, your older version. What would you have to ask? Well, we think it depends on the health of your heart. The happier it is, the more you want to know about your future. But in the opposite case, then you need something else. Let us help.

To live our future, we must make peace with our past.

When young and adult Adam met each other, they had different hopes for their lives. Adam, the pilot, is a suffering heart. He lost his Laura; Adam is full of regrets for how he treated her mother; he can’t deal with the memories of his father. Adam, the younger, instead suffers from Ray’s punches, doesn’t show any evident affection for her mother, and he is definitely focused on growing his muscles and having girls.

So, what do both Adam have in common?

Even if so differently, they are grieving for their father. They love their mother, but they deal differently with her. Both Adam have in common the desire to improve their lives. Therefore the two Adam decide to embark on an adventure into the past.

So, they can find their father, destroy The Adam Project and save the world. Easy, right? No, absolutely no. And not only because both of them discovered that they don’t like each other, but because they know that the first step is to make peace with each other.

We can’t change our past. We must learn how to live our present.

No one can change the past and the future. It’s the crucial rule of the whole movie. And it’s Louis, Adam’s father, who reminds us about this totem. His sons want to tell him that he will die, and they try to convince him to stay with them. And Adam, the adult, goes to the bar to meet Ellie, and he tells her how her son loves her. It’s a beautiful attempt to make peace with his regrets; but we are not like Adam, and we don’t have this incredible chance. But there is more.

We must sacrifice ourselves for the good of others.

Louis accepts his destiny and prefers to die instead of causing some incident to the whole planet. However, Louis knows that he can’t change his past; therefore, he tries to live the best time with his sons playing catch the ball in the garden. Something he regrets he couldn’t do more with them. Again it’s the present that’s important between our past and future. The Adam Project teaches us how important it is to sacrifice ourselves, our loved ones, our life for the good of others.

Why does Adam travel back in time? What is wrong with the future?

In 2050, Laura was missing; therefore, Adam decided to go back in time, precisely in 2018, when he had the last signs of her. But, due to a mistake, Adam landed in 2022, where he met his younger version. But he also met Laura because, to rescue our duo, she was also helping them fight Sorian’s forces.

In the last four years, Laura lived in a cabin where she brings our Adams to escape Sorian’s vengeance. But, Laura discovered a critical anomaly in the time jet record. Someone returned from 2018 with no trace of anyone ever going back.

And we know that this person is Sorian, who went back in 2018 to falsify the past, explaining to her younger version how to make as much dirty money as possible, get rid of Louis and gain control over the time travel. And, because Sorian altered the time stream, this journey doesn’t appear in the log’s record.

Laura’s investigation leads to Sorian, and we know how dangerous it is to change the flow of the timeline. She couldn’t kill Laura in 2018, but she did it in 2022. Anyway, Laura succeeded in her mission to meet Adam again, saving him and allowing him to reach 2018.

The future is wrong because of The Adam Project.

After Sorian altered the mainstream of the time, she owned the algorithm that allowed The Adam Project to work. And, because of this issue, adult Adam lost his Laura. And that’s a massive violation of the time travel rules because each person can belong to one fixed time and can’t leave in multiple ones.

As Adam adult reminds the little one that there is no multiverse. “My God, we watched too many movies.” Well, don’t tell us.

What is wrong with The Adam Project?

Let’s make a bit of order because we have two points that aren’t so much evident in the story. And we want to ask for your help. So, let us know if we got something wrong in the comment section. Let’s start.

Anyway, something in the past changed the future. But we can forgive it.

We mentioned how Louis could prevent his death, but he refused because of the damages the world may suffer. Laura does the same. She sacrifices herself to be sure that Adam can destroy the time travel machine. And even Sorian changed her past, revealing how to steal The Adam Project to her younger version. But something changed even more, and we got some doubts.

Young Adam changes his relationship with his mother.

Adam, the adult, explains to his younger version that his mother is grieving too. Therefore he asks little Adam to take care of her and do everything adult Adam didn’t do in his life: showing how much he loves her. Thus, the director offers us the same scene when Ellie looks for a bill to pay and Adam leaves.

However, this time Adam goes back and hugs her mother to do the most important thing we should do daily: say I love you to the most important people of our lives. It’s the only change the story brought, and although it didn’t destroy the planet, we can forgive the mistake because love should always win.

How do the Adams have the time to play with their father?

The last trip using the jet brings the Adams in 2018. But how is it possible that they didn’t go immediately to their fixed time after the destruction of the time travel? Instead, they had the time to play “catch the ball” with their father and, beautifully, the time to tell each other all the beautiful words we would like to say to our dead loved ones. Probably, as Adam explained, it takes a while to sort thirty years of changes, but it seems more a way to force this emotional scene when the trio is finally united playing together.

The CGI and the sense of adventure have a vital role within the movie. The story has some funny moments too. The farting-cough was a genial idea to break the tension of the moment. And even when little Adam punished adult Adam for his delusional lesson on bullying and defence, pushing to the limits the nerves of his adult version when soldiers are around him. The pace is enjoyable, not the best engaging film ever but indeed entertaining.

The script is the Achilles heel. Few points are unclear, and the character’s arch and analysis of our protagonists are pretty basic. The feeling is that the movie is not so original and lacks a bit of creativity in such a fun adventure.

Nevertheless, we think it’s a big problem because the authors destroyed the time travel machine, and now there is no way to go back to the past and change what is done. Anyway, the time spent with our Adams was entertaining in its genre, funny and not any movies need a perfect script.

Our final rating for The Adam Project is:

Did you enjoy The Adam Project?

We hope you enjoyed The Adam Project review and explanation. Let us know your opinion in the comment section. And let us suggest you another similar action movies: Free Guy, The Suicide Squad and The Tomorrow War.

Welcome to my profile! :) I'm Giovanni, the founder at Spotamovie. If you love movies, you are in the right place. Let's enjoy together our community and new films!
4 1 vote
Rate the Movie
Subscribe
Login
Please login to comment
1 Comment
Oldest
Newest Most Voted
Inline Feedbacks
View all comments

Have you watched The Adam Project? Let us know your opinion. 🙂