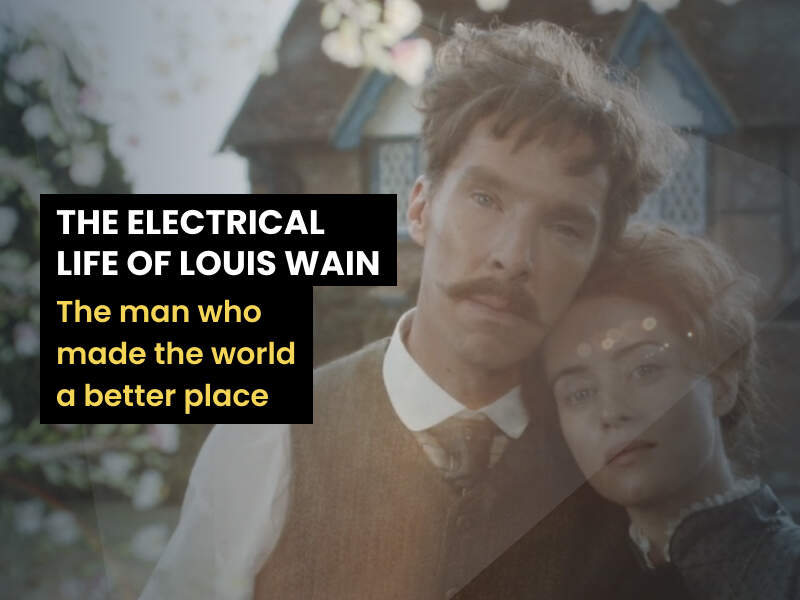 Amazon Prime Video released in 2021 incredible movies, like Malik, Zebra Girl, The Final Code and the Tomorrow War, to mention some. The Electrical Life of Louis Wain is a film painted on our screens, with inspiring messages.

But it’s not just because it won one award at the “British Independent Film Awards” in 2021. Specifically as “Best Make-up and Hair Design”. Not even because it got three nominations at the same festival. Specifically for “Best Costume Design”, “Best Production Design”, and “Best Effects”.

The fact is that Louis Wain is one of those artists that didn’t leave anything in particular. But, still, he changed our society by pursuing the idea of beauty and happiness; seeking them in the electricity that connects us with time, universe and its infinite. But, also, bringing cats into our houses and qualifying their role in our society.

Let us guide you through the story and the analysis. We think that the movie may have some Oscar potential. But it can also inspire for your life.

The Electrical Life of Louis Wain– Details about the movie

The Electrical Life of Louis Wain – The Story

The movie tells us the true story of the eccentric artist Louis Wain. We are in the early 1900s, and Wain is a gifted man who can paint and draw so quickly to leave us surprised by his genius. Louis’s mind is full of ideas and thoughts, moving from music to his research to patent some theories about the mysterious role of electricity in the world.

And it’s not because it can power bulbs, but because it can connect us to something else we can’t even think and therefore explain. But Louis needs to provide for his five sisters and their new governess Emily Richardson. So, how will Louis handle his passions and ideas, facing the daily routine and the deadline of the bills that challenge his family?

And what Wain is going to learn and teach us? The electricity is not the only explanation because interesting and unexpected characters will inspire and support him. It’s an incredible story of geniality and challenges.

The Electrical Life of Louis Wain – Review, Analysis and Insights

Benedict Cumberbatch is one of the movie producers and has a crucial role in the film. He delivered a sensation performance that we think may be worth an Oscar nomination. Benedict acting is a total experience. Where Cumberbatch uses his whole body and explores different stages and emotional conditions of Louis’s life. For example, look at how he walks on the street, so uncertain, nervous and shy. Or when Benedict needs to dance and act like a crazy man without even saying a word. We can only applaud his incredible job.

What have we learned from Louis Wain?

Artists are like mediums to connect us with the principles, ideas, and beauties around us. It’s like they can capture the electricity, follow and feel it so that they can gift us with their creations. Thanks to them we become better people and, perhaps, even our world improve. Louis taught us something, and he made the world a better place.

The world is beautiful, and art makes it better.

In a spectacular and emotional scene, when Louis thanks Emily for gifting him with the best days of his life, their dialogue focuses on the importance of art. Louis thinks that Emily makes him see the world more beautiful, while Emily explains to him that beauty is around us and it’s up to Louis to catch it and share it with other people.

But capturing this beauty is connecting with the electricity that sometimes we may feel. Art is the way to improve ourselves and our world, and we should thank the artists who help us discover more of this beauty and electricity. And also, engage more ourselves to catch the essence of it in our daily routines.

The electrical power around us.

Electricity is not something reserved only for artists. Louis explains to his friend how Bendigo, the underdog, will win the game during the boxing match. It’s the electricity shared by the crowd that Bendigo can feel and let him find the energy he needs to make the impossible. Almost like an artist of boxing, even a boxer can connect with it.

The electricity moves us closer to the divine, and we can feel it even where we are in love. We can perceive our energies and passion for life increasing, smile, and feel alive. Let’s look for it because we can witness the powerful beauty of electricity and love at the movie’s end.

The pursuing of love.

At the beginning of the film, Louis isn’t looking for love. Instead, he wants to discover more about electricity, music and art. But Emily changes his life. Instead, the man who didn’t care about romance and was scared about it finds his strength and inspiration in love.

Love becomes the focus of his mind. Louis decides to marry Emily despite their age difference and social status. Love can’t be stopped but followed; this is what Louis learned and taught us.

But there is more. Even when his family is against him because of Emily, Louis still sends them the money and always take care of them. So there is no regret, proud or selfishness, but just the love for his family. And being kind to other people rewarded him. Louis makes a portrait of Cleopatra for free, without even thinking about money.

Dan Rider will repay his generosity with an incredible act of love for Louis. Mr Rider set a fund to support Louis and his family when he is old and not healthy anymore. The same love, or electricity, comes back to him through the incredible Sir William.

Like an exchange of electricity, love makes a better world. And lastly, let’s mention the last words Caroline wanted to dedicate to Louis. Despite all the yelling and disagreement, she is very proud of Louis; only love can make a difference when looking at death. Incredible lesson.

Follow your dreams to make the world a better place.

Louis never stopped pursuing his dreams. He married Emily, he wanted to be an artist, and he did it. He challenged the system of the permanent position in the office to follow his passions, even if he had to step back because of the difficult financial situation and his love for Emily. Louis went to the United States, coming back poorer than before leaving England. He is an inspiration for his consistency and integrity, no matter the painful price he had to pay for any of his choices.

Louis introduces cats to our lives.

Cats couldn’t live with people throughout history because they weren’t considered pets but just mouse catchers. Sometimes cats have been labelled as evil creatures, too close to witches. Louis discovers in Peter a friend and comfort for his pain. Louis could see their inner beauty, and he thought they could easily transport the electricity.

Without Emily, Peter became his friend, and he started to see its beauty and began to paint it for other people. So that our human society could learn a bit more from them. People began to introduce cats into their homes, and if today you can enjoy the company of your cat, maybe it’s also thanks to the beautiful mission Mr Wain accomplished in his life.

Nightmare and mental issues: a gift or a pain?

Nightmares and fears populated Wain’s mind. Only with Emily, he wasn’t afraid, because Louis found help in love. In the scene on the boat back to England from the United States, we witnessed how destructive and sad mental issues could be. In the final stage of his life, Louis mentally degenerated and lost himself.

Anyway, he found out that the more he suffers, the more beauty he can transmit through his art. And Louis final creations are futuristic, innovative and different from the standard. His fears and nightmare became an inspiration for new masterpieces to share with other people. Louis made other people happy through his sufferance and art. Perhaps, in his pain, there was a light of hope for each of us.

The director Will Sharpe created a film made up of paintings rather than photos. At least this is the impression of the wonderful scenes offered during the film. The pace is good. We have funny moments, romantic scenes, heartbreaking sequences, death and life.

But also, Humanitas and love. Forgiveness and art to make it a masterpiece. The film is full of life, and everything we mentioned above highlights the beauty of this movie. Claire Foy, beautiful and talented, confirms her excellent skills.

Benedict Cumberbatch can dream of the Oscar because he did one of the best movies of his career. The cinematography, the lights, the colours, the costumes, hair and make-up are top-notch. The film recreates the era perfectly. Kudos to the entire cast.

We loved Olivia Colman as narrator. She delivers a book experience to the story, helping us move closer to our characters. With Claire Foy and Olivia Colman, we have a royal experience, considering their past in “The Crown.”

One thing got our attention since the first moment of the film, and it’s the music. The soundtracks composed by Arthur Sharpe provide a romantic and artistic touch to each scene.

The film gives a lot of choices because it’s full of electricity. Anyway, the movie’s end is impressive and let our hearts smile. When Louis finds the piece of Emily’s clothes in his diary, he knows where to go immediately. It’s an epic moment of the film. Louis reaches the place that Emily told him, as the spot where he can connect with her anytime he needs it.

And the electricity increases in the air, transforming the reality in a paining. It’s poetic, inspiring, heartbreaking and reminds us that love is the leading electricity in the world.

It’s challenging because such a beautiful film deserves only good words. But Emily was supposed to be ten years older than Louis. Well, it seems that Wain looks older than Emily. Maybe this is a weak point of the representation, but we would probably miss the talent of Claire Foy. Therefore, let’s skip this critic because the benefits are higher.

As Emily said, cats are ridiculous, silly, cuddly, frightened and brave. Just like Emily and Louis. We think that we could experience all of those during the movie. And even more, considering the noble and romantic love story between them, and the most admirable characters in the film.

Where you can watch The Electrical Life of Louis Wain

Have you watched the movie? Let us know your opinion. We are curious. 🙂