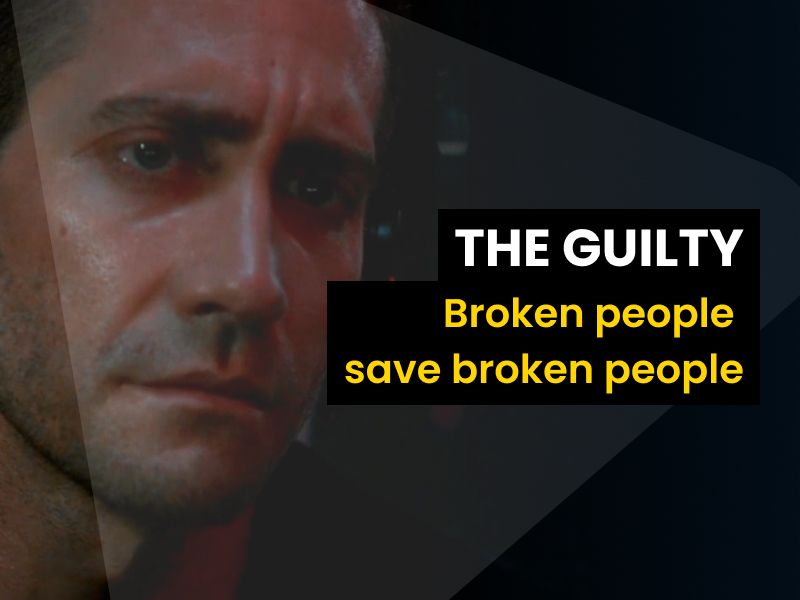 “The Guilty” is an American movie released in 2021. It lasts for one hour and thirty minutes, and it belongs to the categories of Crime, Psychological Drama and Thriller.

It’s the American remake of the 2018 Danish film “Den Skyldige,” we don’t want to compare them, but one question came to our mind: why does Hollywood need to remake instead of making a new film? Lack of new ideas? But, for now, let’s focus on the movie.

The film takes place in one single day, mostly in one location. It’s intense, full of tensions, and won’t make you bored. Jake Gyllenhaal does a fantastic job in the role of Joe Baylor. The director Antoine Fuqua delivered an enjoyable movie, with some good metaphors and enforcing pace in the story.

The Guilty – The Story

Joe Baylor is a policeman working at the 911. He is living a challenging moment in his life, and one day he receives a call that will change his story forever. A husband has abducted his wife, and she calls the police looking for help because it’s a matter of life or death.

Unfortunately, Joe takes the case almost as it was something personal, without the necessary distance to provide support and escalate the incident to the right people. In a crescendo of events, tension and problems, Joe will need to strive against his past to help this woman.

The Guilty – Review, Analysis and Insights

We reviewed several movies touching on the delicate topic of mental health: Zebra Girl, The Woman in the Window, Paper Lives to mention some. However, the Guilty teaches something powerful, and we want to share it with you.

1. And the truth shall make you free

At the beginning of the film, we notice this verse from the Bible, John 8:32. It’s a prophecy for the story we are going to watch. Let us explain it.

Joe is a man who is in the process of losing his family. He killed a kid in a tragic event, and he risks losing his freedom and the possibility to see her daughter become a lady. In addition, he can’t work on the street anymore because he can be dangerous to other people.

Joe suffers from being inside the office. He lives fo the street and adrenaline. Anyone in this world would probably face a challenging moment, and his critical mental health status is immediately evident to us. Joe is not lucid, and he alternate moments of clarity to minutes of chaos and confusion.

The only problem is that he is not honest enough with himself and tries to carry on with his life and plans to lie to the court.

On the other hand, we have Emily.

It takes time and mistakes for Joe to understand that she is kind of his alter-ego. For example, Emily thinks that she didn’t do anything terrible to her baby. Instead, she wanted to help him and free the little Oliver from the “snakes in the stomach.” In the same way, Joe wrongly understands that Emily is the victim of the case, while she is the one who made it.

At a certain point, after minutes of confusion, chaos and tensions, Joe finds the truth. But, unfortunately, he can also mislead the reality of the events.

Joe could be dangerous to his daughter, as Emily was with Oliver and Abby.

It’s the reason why the “truth makes him free,” not literally because Joe is going to prison, but metaphorically because Joe will avoid being a potential danger to his ex-wife and daughter. But it’s not all.

Joe will join the service again on the streets as soon as the court closes the case. In addition, he can be potentially dangerous to other people and himself because he cannot clearly understand his reality.

An act of courage

When a colleague tells Joe that “broken people save broken people,” for Joe, everything starts to be clear. He realises that he needs help, and Joe teaches us how to sacrifice ourselves for other people. It’s a powerful message that prioritises integrity and ethics before our interests.

2. The art of directing

We previously mentioned how the director Antoine Fuqua did an inspiring job, incredibly challenging because he had to direct the film from a van with screens that had access to the cameras, maintaining contact with the cast and the crew.

Eleven days to shoot the whole movie. The problem was that three days before starting shooting, a person in touch with director Antoine Fuqua tested positive for COVID-19. Fuqua tested negative subsequently, but it must be challenging to direct the cast.

When the movie starts, fire, chaos and people asking for help are the main protagonists. But, then, the day after, there aren’t flames anymore, just the smoke and a peaceful sunrise. It seems to be a metaphor to describe the inside of Joe.

He was looking for help, and he needed to do several calls before he found out the truth, like the other people calling 911 for help. The day after is quiet for Joe. There are only the signs of the fire inside him and the sunrise of a new life waiting for him.

When Henry stops the van and wants to bring Emily into the psychiatric centre, the director turns on the heartbeat in the background, and a red light becomes the protagonist. It’s an excellent way to bring anxiety and tension to his audience. And Fuqua does it for the whole film, becoming able to deliver an engaging story almost entirely made inside one office.

It was intense, and we couldn’t relax while watching the movie. Kudos to the cast and the director for the great result. The film opens our eyes to the challenging world of mental health, and we can feel sorry both for Joe and Emily. In particular, because we also misunderstood that Emily wasn’t the victim at the beginning.

Jake Gyllenhaal makes a one-man show within the movie. He is the absolute protagonist who can run an entire movie just being on the phone.

We think that when Joe understood his mistake and that Emily tried to kill Oliver was touching. Joe’s face describes the delusion and frustration better than a hundred words. And which one is your favourite scene? Let us know in the comment section below.

It’s a remake and not an original movie. Nothing against the cast because they did an excellent job. But we expect more from American productions. They have the knowledge, the money and the experience to deliver original products. So why Joe could be still working after what he did and waiting for the court is a hard reality to accept.

Perhaps another supervisor would remove Joe from his duties because of his behaviours inside the office. But it doesn’t matter. The movie is enjoyable and teaches us something powerful. We welcome this genre of films.

Where you can watch The Guilty?

The movie is currently available on Netflix. Check this link to see where you can watch it in your country.