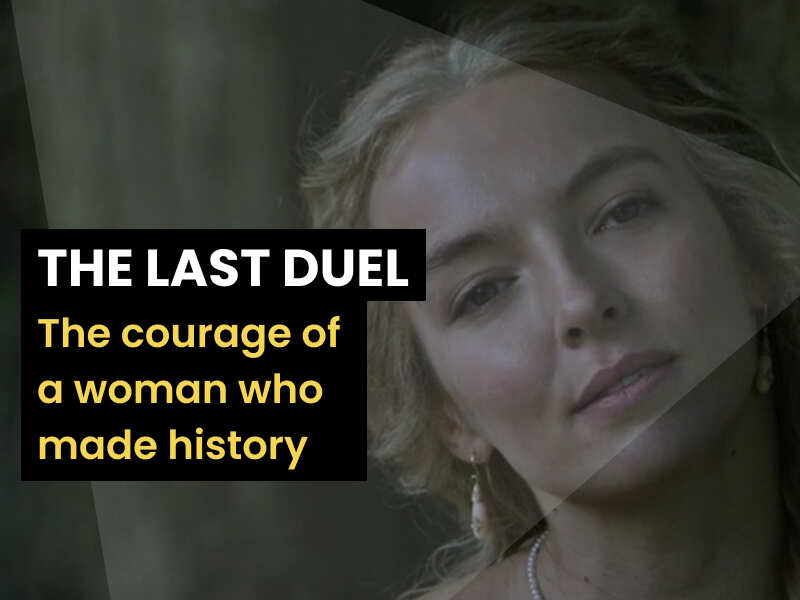 The lover of history and, in particular, of the Middle Ages will appreciate this movie. We can anticipate that “The Last Duel” offers an excellent reproduction of the costumes, houses and tradition.

We can define “The Last Duel” as a unique movie directed by Ridley Scott (Gladiator, Hannibal, to mention some of his masterpieces). Ben Affleck and Matt Damon are the main actors on the scene and writers of the film, supported by Nicole Holofcener.

Why you should watch The Last Duel?

The Last Duel is a story of friendship, love and betrayals. But also of violence, war and weak justice. So even if it tries to focus on the role of women within society in the Middle Ages, the film presents crucial topics and a particular narrative structure. And we think this is a hazardous solution by Ridley Scott and his team, but somehow, it makes sense. And we are going to explain to you why in our analysis.

The film is based on a true story, and reveal the courage of a woman who defied a nation and made history.

The Last Duel – The Story

Two old friends, Sir Jean de Carrooges and Jacques Le Gris, found themselves fighting each other in different aspects of their lives. As a result, their military career takes different paths, as well as their social status and lives. Therefore, they build a story of envy, jealousy and betrayals that will change their stories forever. But why?

The movie will provide you with three versions of the truth, and we have the challenging role of understanding who is lying. A gorgeous, highly educated woman will make things harder between the two old friends, Marguerite de Thibouville.

The Last Duel – The Trailer

The Last Duel – Review and Analysis

The film offers a circular narrative style. In the first scene, lady Marguerite prepares herself for the duel while the servants dress her. The costumes reproduction and the attention to detail are incredible. And the movie will end by epically developing the initial sequences.

But this is not the only narrative particularity because the so-named “Rashomon” style is the characteristic of The Last Duel. Basically, the film provides you with three versions of the same story, told from the main characters’ perspectives. So who is telling the truth? We think that Mr Scott spoilered to us, and we will expain you why.

Perspective changes the evidence of reality.

Let’s remember that the film lives in the Middle Ages, where justice was challenging without technical support and the evolution of the law. It was still a brutal way to live, where a suspect could become proof. Women played a secondary role within the society, and Lady Marguerite shows us how wrong it was. She managed the house much better than Jean, showing kindness and clever solutions to her people. Therefore, we have three similar versions of the same story, with light but decisive differences.

The truth, according to Jean de Carrouges

Jean version reveals his love for his friend Jacques. He saved Le Gris life during the battle of Limoges. While according to Jacques, it happened the opposite way. When Jean meets Marguerite for the first time, we notice that the introduction to her father labels him as a traitor of the king, a man without honour. Nevertheless, De Carrouges agrees to marry the beautiful Marguerite (who wouldn’t?), even if the property of Aunou-le-Faucon is gone to his ex-friend Le Gris. It looks like true love, apparently.

We discover Jean’s desire for justice until he looks for it directly in Paris, to the king. In his vision, his relationship with Marguerite is perfect. He cares for her and supports her after the brutal rape. A version of the truth that is different from the one provided by Jean’s wife.

The truth, according to Jacques Le Gris

As we anticipated, in this version of the truth is Jacques, who saves Jean’s life. Jacques always defends Jean from Pierre’s attacks after they lose Limoge. Like in a paradox, he praises Jean for his loyalty to the king. And let’s be clear, Le Grise is not the perfect example of trust and loyalty after his actions against his dear “friend” Jean. Le Gris tells us how he felt in love with Marguerite and, especially, how he thought she was in love with him.

Finally, Le Gris reveals to us the reason that probably ruined his friendship with de Carrooges forever. When Jean comes back from the disastrous campaign in Scotland, Pierre jokes about him. Jacques tries to defend his friend, but Jean becomes angry and pretends to be respected. Le Gris must call him Sir because he showed more loyalty on the battlefield than Jacques. De Carrouges can’t stand the luxurious life of Jacques. It seems that the two friends can’t recognise themselves anymore and, in this version, it is, of course, Jean’s fault.

As a consequence, Le Gris goes to rape Marguerite. However, even in his statement to Pierre, Le Gris keeps his position, saying that he never raped the beautiful Marguerite, but that she agreed to engage in sex. According to Jacques, Pierre tried to set a trial to discharge Le Gris from any accusations, but Jean didn’t even consider Pierre and went directly to the king in Paris to receive justice. As awesome Jacques may look, he is not the best character we ever met.

The truth, according to Marguerite de Thibouville

Marguerite’s version reveals another perspective, more feminine and focused on the abuses she received from Le Gris, her husband, and her mother-in-law. Marguerite unveils that all the flattering Jacques was imaging, in reality, it was her way to manipulate him, because as she said:

“A smile and a kind word go much further than a threat. Even if you don’t mean it.”

The metaphor of the stallion.

The stallion’s scene is a powerful metaphor for what will happen to her. The gate remained open; the mistake allowed the stallion to enter and get pregnant Jean’s horse. So it looked like when Marguerite made the mistake to open her gate and letting in the “stallion” Le Gris, who, most probably, is the father of Marguerite’s baby. She says that the pregnant horse needs to be free and not in the cage to have a healthy pregnancy, precisely like Marguerite’s story, where she wanted to be free to be herself.

We should remember how she needed to fake orgasms, being scared to express herself with her husband. But we discover how cruel was her mother in law with her. But also how she brilliantly managed the tasks to run the house, adding kindness and new rules, when Jean was at war. After the rape, Jean almost suffocated her and didn’t show any mercy for his wife. He just thought that he should be the one to have her again, and he forced Marguerite to have sex with him in another domestic rape.

And Jean got upset with her coming back from the war for Marguerite’s new dress, ignoring her without showing any sign of love. Marguerite also loses the friendship with Marie, always becoming more lonely. A story defintely different from the one told by Jean; that’s the power of perspective.

Both Jean and Marguerite have an incredible desire for justice, but with a fundamental difference. De Carrouges never stops and doesn’t fear anything. Marguerite, instead, when she became aware of the possibility to be burned alive, wanted to give up on justice to take care of her baby. Marguerite is an interesting character, a revolution in the era of no justice.

But who told the truth?

We think that the director told us the truth. At the beginning of the third version, according to Marguerite, the word truth remained on the screen for a few seconds. So it seems that Marguerite’s explanation is accurate, and somehow, we agree. Marguerite tells the story without anger or rivalry. Instead, she added more human details to the plot.

In her version, she is not just the hot girl envied by anyone, but a woman wounded several times, but with the strength to react and look for justice. Both Jean and Le Gris have too much rivalry, and their friendship was toxic from any perspective we may pick.

It’s an epic scene. We can admire the skills of Ridley Scott, the man who brought the “Gladiator” to our screen. The audio delivered when the horses started to hit the ground is touching and adds intensity to the scene. The feeling is to be there on the battlefield with our protagonists. The details of the armours, the golden details on Marguerite’s shoes, the cinematography on delivering each clash between the two warriors are top-notch.

Anyone who loves cinema can appreciate the quality of this epic moment. Three rounds are necessary before the two ex-friends engage in a ground battle. Exactly three, like the number of the truths we heard till the duel. Apparently, three is the perfect number that opens the doors of the truth to us. But first, we discover the nasty side of Jacques, who kills the horse and Jean’s squire without any needs to do so.

The king said that God would speak through them, revealing the truth. And it’s a bloody one. The exhausting battle finally reaches its peak when Jean asks his friend to admit his crime. But not even death scare a liar, and he keeps proclaiming himself not guilty. God seemed to disagree; therefore, “justice” is now delivered.

The end focuses on the beauty of Marguerite and her baby. Finally alone, and free to express herself. The long shot on Jodie Comer is a ray of light after the darkness of the duel. And may God bless the incredible talent and beauty of the most “promising” actress on the stage.

The cinematography is spectacular and delivers an incredible movie. Matt Damon and Adam Driver offered a fantastic performance. We mentioned already above Jodie Comer skills. Her ability to express any feeling on her face is not easily noticeable in other actresses. The music, the sound effects, the costumes and the reproduction of the Middle Age sceneries are perfectly delivered. We think it’s one of the best movies of 2021.

We previously mentioned that the narrative structure is something particular and a massive risk that the writers and the director chose. Did it work? Let us know in the comment section below. In our opinion, it makes the movie slow and may annoy part of the public. But let’s consider something. The film moves around a trial, where the king and the people decide who is telling the truth. We are in the Middle Age, and it was much more complex delivering justice.

In a certain way, the film forces us to analyse any details of the stories and then become the trial judges. The feeling is that the film may lose its characteristic becoming another medieval story with another solution. It becomes slow in the middle part of the story, but it has logic. Even if we included this choice within the cons section, it might be a pros one. What do you think?

Where you can watch The Last Duel