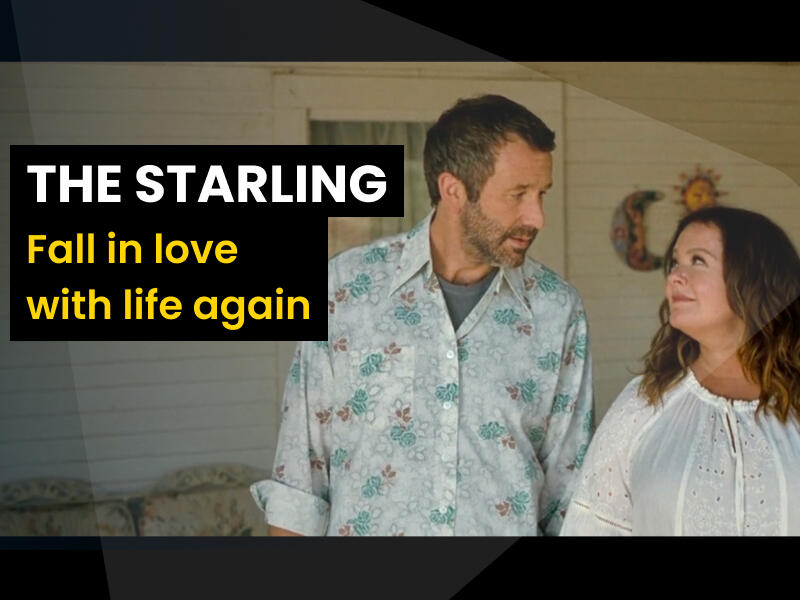 The Starling is an American movie released in 2021. It belongs to the category of drama, and it lasts for one hour and forty-two minutes. The Starling let us connect with nature and rediscover the inner desire of love and life that we sometimes lose because of unfortunate events.

We recommend watching the movie because it reminds us how fragile and strong we are at the same time. And to increase your strength, let us guide you through this story.

The Starling – The Story

Lilly and Jack are a couple full of dreams and love for their baby Katie. But, unfortunately, due to a tragic event, their lives change, taking paths unthinkable for them. Life has the power to surprise us when we forget how something terrible but natural can easily break us.

Therefore Lilly and Jack begin a personal journey among the paths of grieving, mental health and life to, hopefully, find a new destination. Interesting characters will try to support them. Among them, one is definitely unexpected but efficacious.

The Starling – Review, Analysis and Insights

Even if some critics labelled The Starling as a comedy, let us tell you, they are wrong. It’s not the film to let you enjoy relax after a busy day, but one that can be important to prepare us when life won’t be gentle to us. Mainly because the answers are closer to us than expected. Let us explain it.

1. Life can kill us more than once, but sometimes we can resurrect.

Losing a baby looks like something unnatural, but it’s part of nature. When something so horrible happens, it’s almost impossible to raise again. After losing her daughter, Jack felt useless and couldn’t figure out his position in the world and with Lilly. Jack was kind of dead, till the point he tried to kill himself.

Dr Larry quit his psychiatric career. He simply gave up. Listening to his words, we had the feeling of a man lost in his space, dead inside and who needed someone to push him back to life.

The same happened to the Starling, almost killed by Lilly in that specific moment when she needed to let her anger go, as doctor Larry suggested. But they don’t share only this tragedy because both of them had Lilly in their lives.

Prioritising other people to forget about your troubles.

Lilly prioritises other people’s sufferances without managing her own. Jack and Lilly have a different way of grieving because each of us is different, fortunately. Lilly’s perseverance is inspiring. She never gave up, even if she was close more than once.

Nature first takes away, then always offers a solution.

As we mentioned, life can kill us multiple times, but it provides solutions if we listen. Let’s look at Lilly, for example. She tries to expel the Starling from her garden in her journey to heal herself. It’s the moment when she rediscovers her will to live and capacity for love.

How does she do? Lilly needs to experience pain, frustration, loneliness, and the need to feel helpful and take care of someone, particularly after losing her daughter. Lilly witnessed that the Starling wanted to protect its nest, and when she almost killed it, she tried everything to get him back to its family. And she succeeds.

But it’s not only about the Starling.

First, Lilly killed a bird, and then she felt so miserable for what she did. After experiencing a terrible loss, like the death of your daughter, Lilly understands the importance of life. So, therefore, she felt awful to take away someone’s else life from its nest or family.

Then she struggled with her garden because nothing was coming up from there. Until one day, when her frustration was more potent than her rationality, Lilly started to destroy her garden until she spotted a vegetable.

She was so happy because her work was providing results, and her patience, strength and perseveration brought her fruits… or vegetables.

Nature reconnects us to where we come from, and we think it’s a fundamental reason to listen to it.

The importance of respecting nature, time, and the loved one.

This tenacity brings back her Jack. After she reacted against him, yelling at the clinic’s window, she started something inside her husband. But Lilly waited for him, sacrificed herself for Jack, and tried everything to let him grieve and recover. Totally the opposite of being selfish.

We can say the same about Jack. After he witnessed the pain, he caused to his wife attempting to kill himself. He understood that the best thing to do was to heal by himself to prevent further suffering to Lilly. Different personalities, but no one is bad. That’s why it’s essential to respect the time and our partner. As Lilly did and Jack tried to do. What is fundamental is to never quit.

Why respect Nature will help us?

Life, nature or whatever decides to take back Katie’s life. There are no logical explanations. Exactly how Lilly poisoned a bird, in the same way, her daughter died. Nature can give us a tough time, but it can help our loved ones to heal from their illness. Nature can bring new life, new vegetables and inspiring Starlings to let you rediscover your purpose in this world. There are things we can’t understand, but we must be prepared to accept.

For example, after Lilly takes care of the “poor” Starling, at the end of the movie, it and its partner attack Lilly and Jack in the garden. If you were expecting a better Starling after what Lilly did for him, we are sorry, nature can’t change, and now both Starlings are ready to fight back Lilly and Jack. We can’t always love nature, but we need to learn how to deal with it and accept it.

Unfortunately, even when we don’t understand why something happened, nature needs to do its life. As we can’t explain death, we can’t do either with life. We just need to try to prepare ourselves to accept everything will happen.

The Starling teaches something.

As the Starling did, protecting its nest, also Lilly accomplished it. She brought back her husband to life, metaphorically. The Starling too, but this time literally. And, finally, Dr Larry started his psychological path again, this time willing to not give up, thanks to Lilly.

Perseverance, love and the willingness to survive are the most important lesson the movie, or the Starling, delivered to us.

Like the Starling, she prioritises her partner and nest before her interest. The Starling do everything together. They can’t exist alone. What a powerful lesson for each of us!

2. Jack and Dr Manmohan. Two drama in one friendship.

Jack knew that he wasn’t sick. He just needed time to be alone and figure out by himself how to fit again in the world. His dialogues with Dr Manmohan are provocative, funny and reveal a lot about his personality. Who should be the patient, don’t hesitate to throw an arrow at the doctor. He can’t stand his predictability with his questions and the crazy routine his doctor needs to do every day.

Jack felt that also Dr Manmohhan was dead inside, and he wanted to help him. Jack was fragile. Every time someone mentioned her daughter’s name, he felt dead inside again, and all the progress he made were gone. They developed a great friendship, and we liked their way to deal with each other.

Another case is when Dr Larry explains to Lilly the importance to push Jack forward to see if he will come back. Lilly was always gentle with Jack and tried to support him. However, the last call they had, when Jack was still in the clinic, was different. Lilly didn’t listen to Jack’s sighs. Instead, Lilly attacks him, as the Starling taught her, and, this time, she can awaken Jack’s desire to live again and move forward. Jack appreciated her determination, the fact that she never quit and never gave up on him. Isn’t this what love is about? Inspiring.

It’s a powerful movie. It’s not excellent, but effective. It tells a complicated story, perhaps not in the most profound way, but it delivers in the end. All the actors did an excellent job. It teaches that we never should quit, but face our troubles, take the time and start again.

In the end, this is why Jack loves Lilly, because she never quits, and he learns from her how important it is. And as the Starlings do, in a couple, we need to support each other, and it can’t constantly be on one side only.

Our favourite scene is when Jack talks to Dr Manmohan, saying that he feels good now. And Jack tells the doctor that he thinks that he didn’t do an excellent job with him, irritating the doctor to the point he can’t almost stand him anymore. The doctor tells him to embrace the routine and be ready to get back to work with children and to say her daughter’s name without getting depressed.

He likes what the doctor told him and tells Dr Manmohan that maybe there is some hope for him too. Dr Manmohan looks like the friend we usually need in the difficult time of our life. Someone who knows what not to say and can just listen to us.

As we mentioned, this is a complex story: sad and happy, painful and delightful. So we expected a bit more analysis of our characters. Jack said that he was always troubled with his mind, but we don’t know what happened? How did Lilly move on with Jack before having Katie? Why does Jack feel so responsible for his daughter dead? Just because he overslept?

It looks like there is something more than the movie should tell us. And the cinematography felt essential to us. We didn’t have those camera movements which enforce pace on the scenes, even if desperation and pain could quickly bring it on the screen. It’s a great movie, but not a masterpiece.

Where you can watch The Starling?

The movie is currently available on Netflix. Check this link to see where you can watch it in your country.