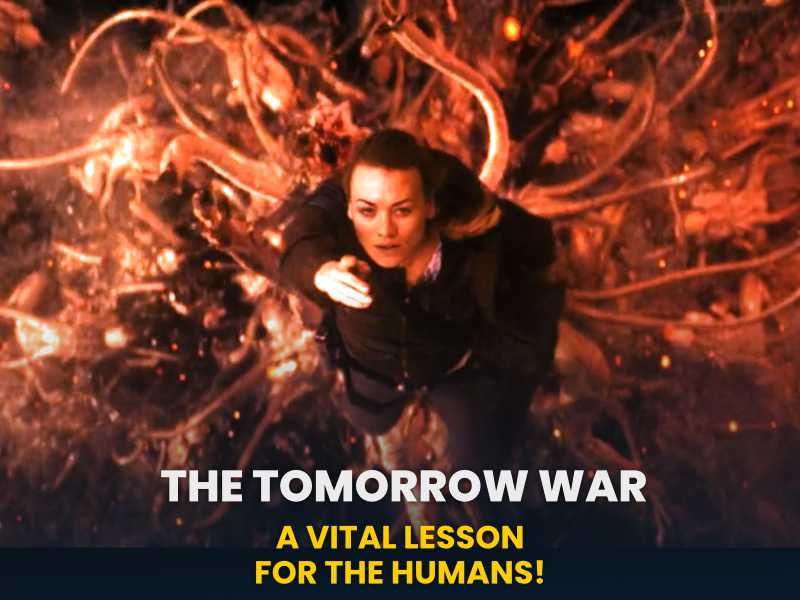 The Tomorrow War is full of action, adventure and drama. Perhaps the script is not perfect, but it provides inspiring action points for all of us.

The film is part of the 2021 catalogue of Amazon Prime Video, and it’s a Paramount Picture production that lasts for 2 hours and 20 minutes.

It’s partially entertaining, the CGI is excellent and, even if there are weak points in the scripts, we found some interesting insights that we want to share with you.

Amazon paid 200,000 million dollars to Paramount Picture for this film and became famous thanks to good advertising. We wanted to put all the pieces of the movie together, because there are challenging tasks waiting for us.

The Tomorrow War – The Story

During the 2022 World Cup broadcast, a group of soldiers from 2051 warn humanity that “Whitespikes” will invade and kill all the humans. To prevent this scenario, the warriors from the future built a device called the “Jumplink“.

This tool can send in the future people living in 2022 to support the one existing in 2051. Dan Forester, a biology teacher, is the main character of the jump mission to the future.

In 2051 he will meet his daughter Muri. She is leading the world to battle against the “Whitespikes”. Intelligence and science are the primary weapons against the aliens, but it’s not enough.

The soldiers will need to be strong, smart and brave to prevent the end of humanity.

The Tomorrow War – Analysis and Insights

Although the story involves much fantasy, it reminds us about real situations and teaches us something important.

1. The Importance of Family

In December 2022, Dan is living a personal tough time, which impacts his family life. Career and lack of purpose are the leading cause which risks him letting his marriage fail and destroy his family.

However, during this incredible travel forward and back to the future, he will see his life from another point of views.

Dan will understand how much pain his wrong decisions, caused to his loved daughter. Blind mistakes may fail his marriage with Emmy. Things that he can’t ever believe are true, but that lead him to wrong actions in his past version of himself.

In the future, he recognises all of these issues. Therefore, when back to the present, he will act in his best way to prevent ruining his family.

Dan wanted to build something important in his life, something meaningful. And his struggles end when he reunited in this new present with his loved one. His best future is his present. It’s made by the people who love him and which he was to distract to see because of his ambitions. Including his father, because everyone deserves another chance. We should never give for granted the people who love us.

The film teaches us that no matter the personal challenges we may face, we should remember the people who are always there for us. And protect them before us. Dan was lucky to have the chance to understand that.

But we are even more fortunate, and we should do our best to keep this principle always on in our lives and better understand our priorities in life.

The film reminds us of the importance of science in our society. Col Muri leads the battle against the aliens because of her knowledge. However, humans to survive needs intelligence more than weapons.

Dan and Emmy understand that the “Whitespikes” arrived on earth way before 2048, in particular, during the “Millenium Eruption” in 946. They remained trapped under an ice block in Russia.

But, because of global warming, the ice is progressively melting and freeing the monsters to attack the humans. The aliens become a metaphor for our political mistakes, which we should take care of, because those are our “Whitespikes”.

Global warming is a severe threat to all of us and, we humans can be the cause that will destroy us forever. The movie teaches us this vital lesson. Let’s avoid being the monsters and killers of ourselves.

3. Distrust in World Government and Institutions

No one in the story trusts governments. Everyone wants to keep decisions away from institutions. Perhaps, because in the real world, the ‘politics globally failed so many times addressing essential issues, like the above Global Warming, that the film wants to suggest us something more.

Each of us must act to make a difference in the Global threat of climate crisis. Like the Volcano’s “expert” from the high school, or Dan’s father able to build a particular aeroplane to reach Russia on the high secret.

We need to sacrifice and cooperate; Muri is the perfect symbol for this action. There is no profit or future without addressing this global threat, and we need to act, each of us, to make a real change. Our politics are too blind in front of reality and too greedy to think in the long term.

It’s a movie that highlights the critical impact that climate change can have on our world. The film has a lot of potentials, unfortunately, not supported by a good and engaging script.

The Tomorrow War inspires and, now, it becomes our responsibility. The movie provides essential input and, if the governments of the world don’t act appropriately, each of us needs to play a vital role in this battle.

Let’s fight now our personal “tomorrow war” today because, regrettably, later can be too late.

Our final rating for The Tomorrow War is

Where you can watch The Tomorrow War