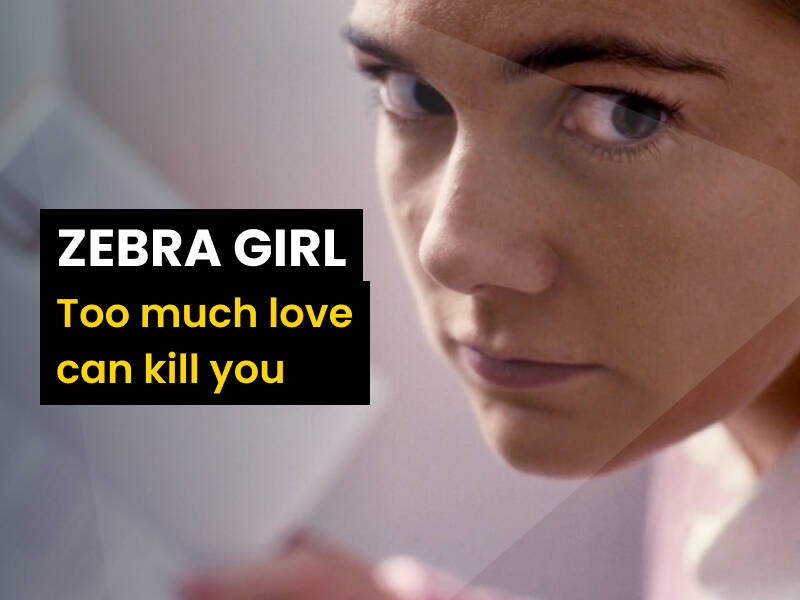 The following summary includes the list of the topics we will cover in our post related to “Zebra Girl.”

If mystery, thriller and psycho-drama are your genres, “Zebra Girl” is the movie for you. It’s intense, delicate and it opens our eyes to the complicated world of mental health.

It’s a story about love, trust and lack of forgiveness. But also of friendship mixed with confusing affection, schizoaffective disorder and schizophrenia. It lasts for one hour and 19 minutes, and it worths your time.

The story looks quite simple, but it’s just an appearance. The reality is that the film is confusing, and it’s not a coincidence. The director let us experience the same symptoms our protagonist Catherine needs to face daily, and everything becomes complex and disturbing. So let’s dive into the story.

Catherine, a lady with a challenging past, finally finds the right partner. Her life is ready to begin when she discovers something about her Dan that will change the story forever. Unfortunately, her present crushes into her past, and she will need to be wise to paint a new future. As in the old-time, her best friend Anita tries to support her and solve the issues troubling Catherine’s mind.

Zebra Girl is not exactly the movie that can relax you after a stressful day. Instead, it’s a movie that can introduce us to the complex reality of mental health. How difficult it is to deal and live with it and how love, in any of its shapes, can make us fragile and violent at the same time

1. The great choices of the director

We appreciated the way how the movie tells its story:

The confusing way to tell the story

How we experience her symptoms

When Catherine tells the detective about her relationship with her father, she says that he never did something terrible to her. She could defend herself because she is a Zebra Girl. Catherine wanted to kill her mother instead. But then Catherine remembers that she killed her father because he abused her.

Or when Catherine confuses Anita with Dan talking with someone on the phone. We get confused, too, to understand later that she had another hallucination projecting her husband instead of Anita. And we perfectly know that Catherine called Anita.

But, when she remembers the Zebra Girl finale with Anita, she suddenly becomes full of doubts about the end of the book. Catherine needs to find it to see that the final scene was a happy ending for Zebra Girl. Finally, Zebra Girl found her prince charming, but the reality is different. Zebra Girl kills her abuser, and Catherine starts crying because her mind alternate moments of confusion and hallucinations with reality. Plus, the continuous whispering in her mind tells her how stupid she is.

Zebra Girl is a continuation of mixed scenes, feelings and memories. It is often overwhelming in the sadness of the events.

2. The weight of the past that never leaves us

Baby Catherine wasn’t sick. She was perfectly healthy but abused by the perverse desires of her father and by the carelessness of her mother. The song and the images of the “Itsy-Bitsy-Spider” are always with her, as are the memories of her sick father. A healthy girl becomes a violent monster outside and a fragile woman inside.

Catherine’s past wrote her future.

When she is cutting her husband’s body, in Catherine’s mind, there are memories of when her father taught her how to kill a fish. So Catherine wants to protect her baby, doing the opposite of what her mum did. Therefore, she refused to take the pills when she discovered how her medication could damage her baby.

Catherine sacrificed herself for the baby. When she found out about Dan dirty’s secret, she reacted strongly and was protective until she killed Dan. Catherine had to kill him because this is what Zebra Girl does. In a certain way, her respect for her model role is a form of love too, painful but love.

“Too much love can kill you,” said a song. Perhaps that would be the perfect soundtrack for the movie.

The beauty of their story is that both of them loved each other, but unfortunately, the weight of her past was too much for the fragile mind of Catherine. Regrettably, she realised it too late, when the police were there to close any hopes of happiness.

3 – Was Catherine a bad character?

After all the challenges of her past, any of us will struggle in this sad story. However, we appreciated how she tried to get back in her life, taking her medication and starting dating for the first time. Catherine was immediately honest with Dan telling him about her tragic past. She wanted honesty, love and the happiness stolen from her childhood.

Dan did a great job with her, supporting Catherine at any moment. Their story is beautiful if we remove the illness. Catherine is a good character, wounded till death by life. For this reason, the movie does a great job letting us experiencing the struggles of Catherine’s mind.

And was Anita right calling the police?

Their friendship is fantastic. Sometimes borderline, as often happened during young age. But it was a duo, ready to support each other at any time. Anita played the right cards with Catherine, helping her and doing the best possible by calling the police.

Catherine was dangerous alone, and she needed medical support, again, this time. A best friend puts her friend before herself, and this is what Anita does in the end.

It’s a delicate movie. It requires attention to don’t miss essential parts and becomes confused as Catherine. But, as we mentioned above, the director did a great job. We can really feel Catherine’s sufferance and struggles.

The music and the camera’s movement are significant. They deliver pace to the movie, keeping us awake and waiting for the next episode. The actors are talented, especially Sarah Roy playing Catherine. What a performance in this challenging role.

In such a sad movie is complicated to find the best scene. However, there are beautiful metaphors, like when the young Catherine talks with the detective about her mother about how she didn’t do anything to help her. A butterfly tries to escape, exactly like Catherine would like to do, but without success.

But also, the beautiful introduction to the movie we described above is poetic. However, our favourite scene is when Catherine finds out about her mistake. Everything is falling in her mind and life now as she sits on the floor. But, at least we hope, a new beginning after her new medical treatments. Even if it looks impossible, we need to stay positive because there is still a baby to protect.

The movie is missing that special touch that transforms a film into a masterpiece. In addition, the script could be improved by delivering a more detailed analysis of the relationship between Catherine and her mother.

Some points are not a hundred per cent clear.

Where you can watch Zebra Girl?

The movie is currently available on Amazon Prime Video. Check this link to see where you can watch it in your country.

Welcome to my profile! :) I'm Giovanni, the founder at Spotamovie. If you love movies, you are in the right place. Let's enjoy together our community and new films!
5 1 vote
Rate the Movie
Subscribe
Login
Please login to comment
3 Comments
Oldest
Newest Most Voted
Inline Feedbacks
View all comments

Hi. I enjoyed the movie, but what happened to the baby? She was showing during her flash backs, but when Anita asked when she was “coming out” Catherine said 6 months. Did I miss something?

Hi Kim! Thanks for your comment. There a couples of flashbacks within the movie. It would be interesting to know the timestamp of the moment you are referring to. But we think that Catherine, during the film, didn’t deliver the baby yet. All the scenes with babies are memories of her childhood, or projections of her fears and anxieties. Catherine became obsessed with the need to protect her coming baby from what she had to experience in her life. And who knows wat happened to her baby after she delivered it in the psychiatric hospital or prison. We think that this movie deserved more attention by the media, because it’s incredibly touching. For anything let us know, and consider to follow us in one of our social media to don’t miss the new movies. 🙂

The Power of the Dog – New 2021 Movie Recommendation